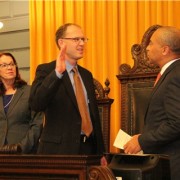 Joined by family and friends, Senator Lewis’ remarks upon being sworn in focused on growing up in South Africa during the racist apartheid regime, and how that life experience fueled his commitment to human rights and social justice. Senator Lewis noted that, for centuries, the Massachusetts Legislature “has been a beacon of progress; an institution that has advanced equality and opportunity for all people, not just in the Commonwealth of Massachusetts but around the country and even around the world.”

“Indeed, it was right here that the movement began to divest from companies that were profiting from the regime in South Africa, ultimately helping to bring about the end of apartheid,” reminded Senator Lewis.

In his remarks, Senator Lewis stressed his commitment to the cities and towns of the 5th Middlesex district, highlighting his focus on strengthening educational opportunities for every child, continuing the effort to keep healthcare affordable, keeping our communities safe and our environment healthy, and improving economic opportunity for all. Senator Lewis also took a moment to recognize and praise his two immediate predecessors representing the 5th Middlesex district: Democrat Katherine Clark and Republican Richard Tisei.

Senator Lewis’ remarks, as prepared, are below.

State Senator Jason Lewis’ Remarks upon Being Sworn In to the Massachusetts Senate
As Prepared – April 17, 2014
Thank you, Madam President. Thank you, Governor Patrick. Each of you has blazed a trail that has been an inspiration for me in my political career and for many, many other people.

If I had been asked as a child if I thought one day I might have the honor of serving in the Massachusetts Senate, I would probably have responded — where is Massachusetts? Growing up in South Africa in the 1970s, my world didn’t extend that far. At that time, South Africa was under the grip of the racist apartheid regime. One of the events that had a big impact on me was the Soweto Uprising in 1976 when I was eight years old. Black students were protesting against the imposition of the Afrikaans language in their schools. Afrikaans was the language spoken by the white minority apartheid government. I was too young to fully understand what was happening, but I did understand enough to know that children like me were being shot and killed by the police.

My family was fortunate enough to be able to leave South Africa and emigrate to this great country when I was twelve years old. The memory of apartheid has since fueled my personal commitment to fight for human rights and social justice.

I am deeply grateful for the opportunity I have had to serve in the Massachusetts House of Representatives and now in the Massachusetts Senate. The Great and General Court is an institution that for hundreds of years has been a beacon of progress; an institution that has advanced equality and opportunity for all people, not just in the Commonwealth of Massachusetts but around the country and even around the world. Indeed, it was right here that the movement began to divest from companies that were profiting from the regime in South Africa, ultimately helping to bring about the end of apartheid.

Madam President, I am excited and eager to work with you and our colleagues to continue to move our communities and our Commonwealth forward. To strive for great schools for every child; quality, affordable healthcare for all; safe neighborhoods in every community; a living wage with decent benefits for working families; a healthy, sustainable environment; and economic development opportunities that help people build better lives for themselves and their children.

There are a number of people who made this day possible for me and I would like to thank them: my parents Alvan and Merle Lewis — were it not for their courage in leaving their native country to give their children a brighter future in America I would not be standing here today; my wife Susan who recently went back to school to get a Master’s in education and become a middle school science teacher — I’m so proud of you; my daughters Sophie and Jessie; my campaign team and our volunteers who called and canvassed voters from the beginning of the campaign right up until the polls closed at 8pm on April 1st — unfazed by the cold, the snow, or the rain; the local elected officials and community leaders who stood with us; my Legislative Aide, now Chief of Staff, Laura Richter, who has been my right hand – and my left hand – for the last four years: good luck running the Marathon on Monday; my colleagues in the House and Senate, with special appreciation to the Majority Leader; and, finally, thank you to my constituents in Stoneham and Winchester whom I have served since 2009 as well as my new constituents in Malden, Melrose, Reading, and Wakefield — it is the greatest honor of my life to represent you in the Massachusetts Senate.

In closing, thank you for the warm and gracious welcome to the Senate that has been extended to me. And, thank you to everyone who joined us today for this swearing-in ceremony. I’m so grateful for your support and friendship.