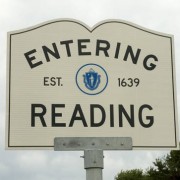 Senator Jason Lewis, Representative Bradley H. Jones, and Representative James Dwyer are pleased to announce that the Town of Reading will receive a $7,500 grant for historical marker upgrades at Laurel Hill Cemetery through the Civil War Preservation grant program, as part of the recognition of the Civil War’s 150th anniversary (sesquicentennial).

“Part of what makes our Commonwealth so unique is how our state’s history is so inextricably tied to our nation’s history,” said Senator Lewis.  “It is important that we preserve these invaluable reminders of our history so that we can best educate the next generation about their heritage, and inspire them to want to play an active role in shaping the next chapter of Massachusetts’ history.”

“The Civil War was a pivotal moment for both Massachusetts and the United States of America,” said House Minority Leader Brad Jones. “By preserving various historical markings within Laurel Hill Cemetery, we will ensure that the history lessons found within the town of Reading will be available for the benefit of future generations.”

“The preservation of the history of our Commonwealth and our nation is needed to pass on the important lessons we have learned, and to honor those who fought for our freedoms and our nation,” said Rep. Dwyer. “This grant helps us pay tribute to those who have gone before us, who made sacrifices to make our country the great nation it is today.”

The Laurel Hill Cemetery has over 200 Civil War soldiers interred in its grounds.  Forty-eight of the soldiers were killed during battle and have a separate monument in their honor.  Eight of these graves are in disrepair and cannot be read.  The project would repair and stabilize these headstones and place a marker on one that does not have one currently.  The total cost of the project will be $17,500.  Reading has already collected $9,500 from the Board of Cemetery Trustees, Veterans’ Memorial Trust Fund, and 350th Celebration Trust Committee.  They have also received letters of support from the Town Manager, Veterans’ Service Agent, Reading Antiquarian Society, and Civil War researcher Virginia Blodgett.

The Cemetery hosts walking tours and lectures, and currently is developing a “self-walking tour.”

The Civil War Preservation grant program recently awarded nearly $180,000 to 37 cities, towns, and non-profit groups across the Commonwealth for the preservation of Civil War memorials, monuments, historic documents, books, and more.  The program provides matching grants of up to 50 percent of a project’s total cost, but not exceeding $7,500, to preserve existing Civil War memorials, monuments, gravestones, document collections, and more. Applicants were either municipalities or non-profit organizations including libraries, historical societies, museums, or universities.

“Massachusetts leads the nation in providing resources and benefits to our veterans and military families utilizing innovative collaborations to maximize resources,” said Department of Veterans’ Services Secretary Coleman Nee. “This Commission is another great example of state, local and private organizations working together to preserve the history of the Civil War and ensure that future generations will remember the sacrifices and honor the memory of the brave men and women who came before them.”