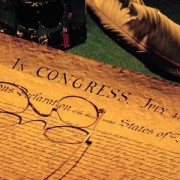 I’m sure many of us are excited for our Fourth of July weekend plans, whether it involves travel to see family, some relaxation time at the beach, or grilling in the backyard.  However, at the risk of sounding cliché, I urge you to take a few moments to reflect on the meaning behind America’s Independence Day.

As a child, I never imagined that one day I might have the honor of serving in the Massachusetts Senate.  The reason for that, as you may know, is that I grew up in South Africa.  At that time, in the 1970’s, South Africa was under the grip of the racist apartheid regime, the embodied antithesis to the notion of all men being created equal.

One of the events that had a big impact on me was the Soweto Uprising in 1976 when I was eight years old.  Black students were protesting against the imposition of the Afrikaans language in their schools.  Afrikaans was the language spoken by the white minority apartheid government.  I was too young to fully understand what was happening, but I did understand enough to know that children like me were being shot and killed by the police.

My family was fortunate enough to be able to leave South Africa and immigrate to this great country when I was twelve-years-old.  The memory of apartheid has since fueled my personal commitment to fight for human rights and social justice.

For hundreds of years, the Commonwealth of Massachusetts has stood as a beacon of progress, advancing equality and opportunity for all people.  Indeed, it was right here that the movement began to divest from companies that were profiting from the regime in South Africa, ultimately helping to bring about the end of apartheid.

Consider the Commonwealth’s long and storied heritage of advancing equal rights.  The first woman to legally vote in the American colonies was Lydia Taft of Uxbridge.  Court decisions paved the way for Massachusetts to be one of the first states to abolish slavery in the 1780’s.  Of course, we’re all well aware of the Commonwealth’s historic standing as the first state to recognize same-sex marriage a decade ago.

It has now been 238 years since our nation, and my adopted homeland, declared its independence from Great Britain.  Despite the passage of time, we have not lost sight of the prevailing value, immortalized in the Declaration of Independence, that “all men are created equal.”  That notion has been the foundation for our state’s and our nation’s morality for nearly two-and-a-half centuries.

So, as you’re spending time with friends and family, perhaps relaxing on that beach or flipping a burger on your grill, take a moment to reflect on the freedoms we enjoy that have been borne out of our nation’s independence.  Further, be inspired by the freedom that was made possible by the sacrifices of many who came before us to become even more involved in your community, in whatever form that spirit of volunteerism and civic engagement may take.