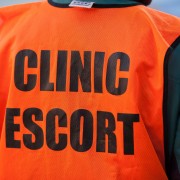 The Massachusetts Senate on Wednesday passed legislation to enhance public safety and remove barriers to access reproductive health care facilities in Massachusetts, Senator Jason Lewis announced.  This urgent legislative action follows the recent U.S. Supreme Court ruling striking down buffer zones across the nation, including the existing 35-foot buffer zone that was passed by the Legislature in 2007.

“Women should never have to fear for their safety simply for trying to access health care services,” said Senator Lewis.  “I will always vote to protect a woman’s right to choose, and I will always advocate for safe access to exercising that choice.  This legislation responsibly helps restore women’s privacy, respect, and safety when accessing health care while addressing First Amendment concerns.”

To enhance the ability of law enforcement officials to maintain public safety, the bill prohibits certain conduct outside reproductive health care facilities that threatens access and safety.  The bill authorizes law enforcement officials to order immediate withdrawal of individuals who have on that day substantially impeded access to a facility entrance or driveway.  After the order is issued, the individuals must remain at least twenty-five feet from the facility’s entrances and driveways for a maximum of eight hours. The 25-foot boundary must be clearly marked and the reflecting law must be posted.

The legislation also prohibits a person from intentionally injuring or intimidating, or attempting to do the same, a person trying to access or depart from a facility by force, physical act or threat of force.

The bill prohibits impeding a patient or staff member’s access to or departure from a facility with the intent to interfere with that person’s ability to obtain or provide health care services.  It also prohibits knowingly impeding an individual or vehicle’s access to or departure from a facility, as well as prohibiting recklessly interfering with the operation of a vehicle that attempts to enter, exit, or park at a facility.  Violations of any of these provisions can result in arrest and criminal charges.

In addition, the bill enhances the ability of private parties and the Attorney General to ensure compliance by filing a civil action in court.  The bill allows an affected individual, entity, or the Attorney General to bring a civil action in Superior Court seeking injunctive relief, damages, and attorneys’ fees.  The court may also award civil penalties.  Any violation of an injunction would constitute a criminal offense.  These provisions largely reflect the civil remedies available under the federal Freedom of Access to Clinic Entrances (FACE) Act.

The bill also amends the Massachusetts Civil Rights Act (MCRA) to allow the Attorney General to obtain compensatory damages on behalf of an affected individual or entity, recover litigation costs and fees and seek civil penalties for the interference of constitutional rights.  The Attorney General currently has the ability through the existing MCRA to seek injunctions where an individual or group “interfere by threats, intimidation or coercion, or attempt to interfere by threats, intimidation or coercion” with the exercise of a protected right, including the right to access reproductive health care.

The bill now goes to the House for consideration.