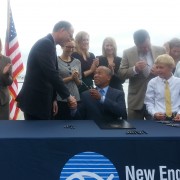 Flanked by a dedicated coalition of animal welfare and marine conservation activists, Governor Deval Patrick on Thursday, July 24, signed into law legislation sponsored by Senator Jason Lewis that bans the possession, sale, trade, or distribution of shark fins in Massachusetts.  The practice of “shark finning,” which is both morally repugnant and harmful to the health of our oceans,  is when a shark’s fins are sliced off, often while the shark is still alive, with the mutilated shark thrown back into the ocean, unable to swim and left to die.  The fins are primarily used to make shark fin soup.  While the practice of shark finning is prohibited by both federal and state law, the market for fins continues to promote the practice in foreign and international waters.  This law will end that market in Massachusetts.