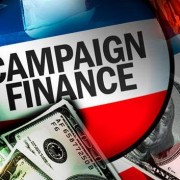 The Massachusetts Senate last week unanimously passed a bill to strengthen reporting requirements for independent expenditure committees and bring a higher level of transparency to elections in the Commonwealth, Senator Jason Lewis announced.

“The more transparent our political process is, the more faith voters will have in it,” noted Senator Lewis.  “This legislation holds true to that fundamental value by strengthening the ability of voters to know who is funding political activity in elections – where the money is coming from and where it is going – in a more comprehensive and in a more timely fashion.  In a post-Citizens United world, this legislation is an important step in the right direction to restore necessary oversight in our politics.”

Senator Lewis broke with many in his political party when he voted for an amendment offered by Republican Senator Bruce Tarr of Gloucester, which would have closed a loophole that allows some organizations to exceed the $500 contribution limit by giving up to $15,000 to a single candidate.  However, the amendment failed 28-10.

Legislators did move to enhance their own campaign finance reporting, as the bill increases the frequency of reporting for state legislative candidates.  Under the bill, candidates for state Senate or Representative must file with the Massachusetts Office of Campaign and Political Finance (OCPF) by July 20 before a biennial state election and by the thirty-fifth day before a special primary, among other reporting requirements.

The bill requires any independent expenditure or electioneering communication transmitted through paid television, internet advertising, or print advertising appearing larger than fifteen square inches to include a written statement of the top five contributors if contributions exceed $5,000 and directions to OCPF website for a listing of all contributors.

The bill directs political action committees to designate a depository for campaign funds and to report on all contributions received and expenditures made twice a month. The bill also prohibits public employees from serving as the treasurer of a political committee.

The bill also removes an aggregate limit on individual campaign contributions in response to a recent Supreme Court ruling which struck down a similar federal provision.

The Senate and House will now form a conference committee to produce a compromise bill for final passage and consideration of the Governor.