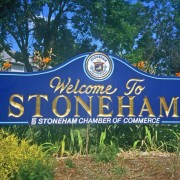 State Senator Jason Lewis announced that a home rule petition for the Town of Stoneham authorizing five new liquor and malt beverage licenses was signed into law by Governor Deval Patrick this past week.

“I am very pleased to have been able to work with Governor Patrick to secure passage of these licenses for Stoneham,” said Senator Lewis.  “These licenses will help support and encourage further economic development in Stoneham.”

“This measure will generate more business opportunity in Stoneham,” noted Edward Doherty, President of the Stoneham Chamber of Commerce, and Executive Vice President of StonehamBank.  “Senator Lewis has been an effective advocate for Stoneham, and we appreciate him making Stoneham’s local economy a priority.”

“Thanks to Senator Lewis’ diligence, this important economic development priority for Stoneham was addressed,” said Thomas Boussy, Chairman of the Stoneham Board of Selectmen.  “It has been no small feat for Senator Lewis to pull double-duty on behalf of Stoneham while the Representative seat has been vacant; so, I’m especially appreciative to Senator Lewis’ commitment to getting results for Stoneham’s families and businesses.”

Senator Lewis helped shepherd this home rule legislation through the Massachusetts House of Representatives earlier this year, while still a Representative.  After joining the Massachusetts Senate following his special election victory in April, he was able to then shepherd the bill through the Senate, prior to working with the Governor’s office to secure Governor Patrick’s support of the new law.

The bill – H3786: An Act authorizing the town of Stoneham to grant 5 additional licenses for the sale of all alcoholic beverages to be drunk on the premises – will now be known as Chapter 348 of the Acts of 2014.