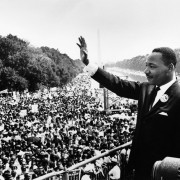 Many people are surprised to learn that Dr. King had a strong connection to the City of Boston and to Massachusetts.  Indeed, he often referred to Boston as his second home. In the 1950s, he studied at Boston University where he earned his doctorate.  And, it was in Boston that he met Coretta Scott, a student at the New England Conservatory, who would become his wife.

This year is the 50th anniversary of an important speech that Dr. King delivered to a joint session of the Massachusetts legislature on April 22, 1965.  The day after that speech, he led what was described as Boston’s first giant freedom march.

I imagine that Dr. King was drawn to Massachusetts, at least in part, because of our legacy of being at the forefront of civil rights and human rights in American history.  For hundreds of years, Massachusetts has stood as a beacon of progress, advancing equality and opportunity for all people.  The first woman to legally vote in the American colonies was Lydia Taft of Uxbridge, back in 1756.  Massachusetts was one of the first states to abolish slavery in the 1780s.  In the middle of the 19th century, Horace Mann championed universal public education for all children.  And, of course, in recent years we were the first state to recognize same-sex marriage.

But, if Dr. King were still alive today, I think he would be dismayed that, even here in Massachusetts, we still have a long way to go to realize his dream of true racial equality and justice for all.  There are those who believe that with a black president in the White House — and a just recently departed black governor in Massachusetts — we are now living in a colorblind society.  They should read Michelle Alexander’s powerful and devastating book, The New Jim Crow.  This book, which lays bare the truth about mass incarceration and racial injustice, along with recent events we have all witnessed in Ferguson, New York, and elsewhere, should make it abundantly clear that, sadly, our society is still far from colorblind.

Consider this shocking statistic here in Massachusetts: people of color make up about 20% of our state’s population, yet almost 80% of those convicted of drug offenses are black or Hispanic, despite the fact that all races abuse drugs at roughly equal levels.

Given the growing awareness that our criminal justice system is far from colorblind and that mass incarceration is costing taxpayers enormous amounts of money, I’m hopeful that the Massachusetts legislature will seriously tackle criminal justice reform during this new legislative session.  Some of the areas that I believe we need to reform include getting rid of mandatory minimum sentences for non-violent drug offenses, bail reform, strengthening diversion programs that provide treatment rather than incarceration for mental health and substance abuse, and making it easier for those who have served their time to reintegrate into the community and become productive members of society.  These reforms would not only make our criminal justice system more just, they would also make our communities safer and save tens of millions of dollars in scarce public resources.

A number of other states are actually ahead of Massachusetts in implementing these kinds of reforms, including Texas, Colorado, and Mississippi.  Criminal justice reform presents an excellent opportunity for bipartisan solutions.

As Martin Luther King said, “Human progress is neither automatic nor inevitable… Every step toward the goal of justice requires sacrifice, suffering, and struggle; the tireless exertions and passionate concern of dedicated individuals.”  We can continue the work of Dr. King by tackling today’s civil rights challenge of criminal justice reform.