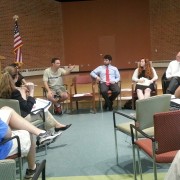 Keeping up his commitment to engage residents of the 5th Middlesex district in a variety of substantive ways, Senator Jason Lewis is very excited to unveil a new series of issue discussions that will be held in all six communities of the district over the coming year, entitled “Community Conversations.”  These events will feature a different issue being discussed at each stop, with an opportunity for residents to have questions answered by experts on the given topic.

The first Community Conversation will take place next month in Malden, and it will include a presentation from Richard Davey, CEO of Boston 2024, discussing what would be involved in a Boston-hosted Olympic Games and what impact it would have on our communities north of Boston.  The Community Conversation, which is being put on in coordination with the Office of Malden Mayor Gary Christenson, will be an opportunity for area residents to learn more about proposed plans for a Boston-based Olympic Games, have questions answered, and raise any concerns.

The event – Community Conversation: The Boston 2024 Olympics Proposal – will take place on Tuesday, April 7, at 6:30pm.  It will take place at the Malden Senior Center, 7 Washington Street, Malden.  Residents from all communities of the district are encouraged to attend.

“The conversations I have directly with constituents across the district are the best source of information and guidance to help me do my job in the State House,” said Senator Lewis.  “I am excited for the ‘Community Conversations’ series as it will offer another meaningful opportunity to engage in substantive dialogue with residents across the district.  Further, I am pleased to kick off this series with a discussion about a possible Boston Olympics, as members of the community have a number of questions and concerns that need to be addressed.”

“I thank Senator Lewis for holding his first Community Conversation here in Malden,” said Mayor Gary Christenson. “I am looking forward to this informational session and to learning about the possibilities of a Boston hosted Olympic Games as well as the impact on our community.”

Constituents can also mark their calendars because the second Community Conversation is coming up and will offer a terrific opportunity to learn more about the Massachusetts State Budget.  Noah Berger, President of the Massachusetts Budget and Policy Center, will offer an informative presentation highlighting the important priorities that are funded by our tax dollars.  That event – Community Conversation: The Massachusetts State Budget – will take place on Tuesday, May 5, at 6:30pm.  It will take place at the GAR Room, Melrose Memorial Hall, 590 Main Street, Melrose.

Additional Community Conversations in Reading, Stoneham, Wakefield, and Winchester will be announced in the weeks and months ahead!