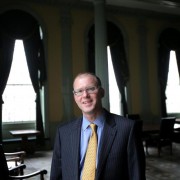 A lot of people suddenly want to know what Democratic Senator Jason Lewis thinks about marijuana.

“What I say is that I have had concerns in the past about liberalizing our marijuana policy,” said Lewis, the new chairman and sole member of the state Senate’s Special Committee on Marijuana. “I did oppose decriminalization in 2008, and I did oppose medical marijuana in 2012, when it was on the ballot. And the reason was simply because my concern is about protecting young people.”

Senate President Stanley Rosenberg asked Lewis to take on a months-long study of marijuana policies in reaction to a bill and a widely expected 2016 ballot measure seeking to legalize its recreational use. The committee will not address whether Massachusetts should legalize recreational use of marijuana. Instead, Lewis has been charged with examining the hundreds of judgments and decisions lawmakers may need to make if full legalization of marijuana is approved.

“Would it be a commercial market?” Lewis, of Winchester, asked. “Would it be a nonprofit market? Would it be a state-run monopoly like some states have for their liquor industry? What would the rules be in terms of licensing requirements? What kind of regulatory framework would we have in terms of what types of products are allowed?”

Senate members from nearly every legislative committee are expected to be called upon as Lewis delves into aspects of marijuana policy. The loosely knit group will also explore what stymied the implementation of medical marijuana after it was passed by a ballot measure in 2012.

The job was not one he asked for, Lewis said. But the Democrat, who represents the 5th Middlesex District, credits Rosenberg with being proactive. Colleagues say Lewis, who was also named this year as chairman of the Joint Committee on Public Health, was the right choice to take on what is expected to be a highly-scrutinized task.