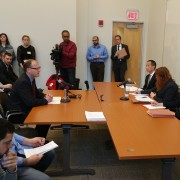 Senator Jason Lewis was pleased to deliver testimony to the Office of the Massachusetts Attorney General in support of new regulations on electronic smoking devices, also known as e-cigarettes, filed by Attorney General Maura Healey.

The regulations filed by Attorney General Healey include banning the sales of e-cigarettes to minors, requiring child-resistant packaging on nicotine liquids, and requiring that such products be kept behind the counter at stores.

“We must take steps to stem the exponential growth in e-cigarette use by our youth in order to prevent another generation from becoming addicted to nicotine and stuck on a path that is undeniably harmful to their lifelong health and well-being,” said Senator Lewis.  “With e-cigarette companies using tactics out of the Big Tobacco playbook to entice young customers – from celebrity endorsements to candy flavorings for their products – we must respond with sufficient protections for our youth.”

Many cities and towns across the Commonwealth have taken steps to restrict young people’s access to e-cigarettes.  Approximately 63% of the state’s population lives in municipalities that have already banned e-cigarette sales to minors.  However, this patchwork approach is insufficient to protect our youth as it still leaves ample access to points of purchase.

Senator Lewis’ remarks, as prepared for submission, are below.

State Senator Jason Lewis’ Testimony to the
Office of the Massachusetts Attorney General
As Prepared for Submission – April 23, 2015

I am writing today to voice my strong support for the Attorney General’s new regulations that address the purchase and use of electronic smoking devices, commonly referred to as e-cigarettes or vaporizers.

Companies are using numerous cigarette marketing tactics from a bygone era to peddle their products: television advertisements, celebrity endorsements, promotional and savings programs, product flavoring enhancements such as cherry or cotton candy, and the distribution of free samples.  According to the National Youth Tobacco Survey that was done in 2013, youth who reported exposure to tobacco advertisements had higher rates of intention to smoke than those who were not exposed to such advertisements. The researchers also found that a greater number of advertising sources to which young people were exposed lead to a greater rate of their intention to smoke cigarettes.  13% of students who said they had no exposures to such advertisements had intentions to smoke, compared to 20.4% among those who reported exposures from one to two advertisement sources and 25.6% among those who reported exposures from three to four of the sources. The methods used to advertise e-cigarettes are illegal for tobacco companies to use regarding combustion cigarettes and smoke-free tobacco because they expose youth to harmful products.

Currently, e-cigarettes are not regulated at the state or federal level.  This means we have no way of knowing just what is in these products.  Studies have shown wide variation between e-cigarette contents between brands and even between identical products manufactured by the same brand.  Simply put, we have no way of knowing what the user and those around the user are being exposed to.

These new regulations add electronic smoking devices to the existing tobacco regulations in 940 CMR 21. They mandate that only those who are 18 years or older can purchase these devices through a face-to-face interaction at the point of purchase and that liquid nicotine be packaged in child-proof containers. Further the new regulations prevent promotional giveaways and the distribution of these products through the mail. These regulations do not ban adults from purchasing or using these products, but instead ensures former smokers, families, and children are not exposed to vapor that contains chemicals and nicotine.

The Attorney General has taken an important first step in protecting our youth from the harmful long-term effects of electronic smoking devices. It is my hope that these regulations spur the legislature to take further action to curb the use of electronic smoking devices. Thank you for your consideration, and I ask that you join me in preventing another generation of nicotine addicts by supporting these new additions to the regulations.  Please do not hesitate to contact me with any questions.