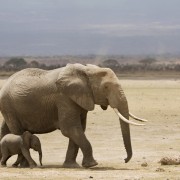 Poaching of elephants and trafficking in illegal ivory is at its highest level in two decades, and, increasingly, this activity is dominated by organized criminal syndicates and militant groups. With the U.S. market for ivory among the largest in the world, we are not only playing a significant role in the demise of African elephants but our addiction to ivory trinkets, carved from elephant tusks, is also providing fuel to transnational crime groups including those with terrorist connections.

Once numbering in the millions, Africa’s elephant population has plummeted to less than 500,000 as an average of 96 elephants in Africa are slaughtered daily by poachers and over 100,000 were killed from 2010 to 2012. Last year in South Africa alone, more than 1,200 rhinos were killed out of a remaining 29,000 left in the wild worldwide. At this rate, certain populations of these majestic creatures will only have little more than a decade left on earth. Rhinos and Asian elephants are likely to face similar fates unless we can end the demand for ivory and rhino horn.

Heightened awareness over the past few decades has led many responsible companies to move away from the use of ivory. If you want to “tickle the ivories” of a Steinway and your piano was built after 1950, you will instead come in contact with a synthetic surface that is superior in every way to ivory. Visit Alexander Westhoff Antiques in Essex, MA, and you can shop with the peace of mind that your purchase did not contribute to the suffering of an animal. The world’s leading online marketplace for antiques, art, and design, 1stDibs.com, has voluntarily banned ivory products from their business as has eBay and Esty.com. All are thriving.

Unfortunately, not everyone is inclined to be so pragmatic or compassionate. Smugglers are able to exploit loopholes and lax enforcement of federal laws allows new, poached, ivory into the market illegally with the legal market serving as cover. The international commercial trade in African elephant ivory has been banned since 1989 under the United Nations environmental treaty, the Convention on International Trade in Endangered Species. However, ivory can easily be altered with a weathered antique look and documents proving age can be easily forged. Without scientific or DNA testing that could damage the piece, it is nearly impossible to tell the difference between ivory that is in the country legally and that which is not.

Elephants are not the only ones at risk. Let’s not ignore the fact that hundreds of dedicated African park rangers are also literally laying their lives on the line in gun battles with well-armed poachers to protect their homeland’s indigenous wildlife. The illegal wildlife market is currently a multi-billion dollar criminal enterprise and the domain of some of the world’s most vicious and heavily armed militant groups such as The Lord’s Resistance Army, which has been accused of murder, abduction, child-sex slavery, and mutilation, and Darfur’s Janjaweed.

Hoping to staunch the relentless slaughter, we have introduced H1275/S440 in Massachusetts, where the Boston/Cambridge market ranks seventh in the nation. We hope to join successful efforts in New York and New Jersey where similar bills were recently enacted. We recognize that by acting at the state level to eliminate loopholes not covered by federal regulations, we can do our part to significantly shrink the market for these exploitive wildlife products.

We can easily adapt and live without ivory and rhino horn; elephants and rhinos cannot.