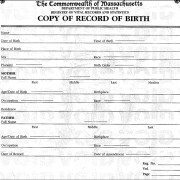 State Senator Jason Lewis is pleased to announce that his measure to facilitate the process for transgender people to amend their birth certificates has been included in the Fiscal Year 2016 state budget signed today by the Governor.  The measure will take effect when the budget takes effect on August 1.

Under existing law (Section 13, subsection (e), of Chapter 46 of the Massachusetts General Laws), a person must show the completion of sex reassignment surgery in order to have the ability to amend the listing of their sex on their birth certificate. However, this requirement is onerous as sex reassignment surgery can often be a series of surgeries and procedures that are very expensive and are typically done over a long period of time.  Also, many transgender people simply choose not to seek sex reassignment surgery.

“Vital records are the primary documents that serve as guideposts to our lives: they announce a child’s birth, affirm our most sacred relationships, and help get our affairs in order after we die,” said Senator Jason Lewis.  “Yet, if you are a transgender person in Massachusetts, state law still requires proof of surgery to amend your birth certificate.  This is an out-of-date and unduly onerous requirement that is also inconsistent with medical best practices.”

Numerous reasons exist why a person should not be required to show completion of sex reassignment surgery to amend their birth certificate.  The procedures may be cost prohibitive, go against the advice of a medical professional, or not be necessary given the needs of the person transitioning.

Additionally, it is important on civil rights and privacy grounds to facilitate an individual’s ability to make such a change to their birth certificate given that Massachusetts allows everyone to search birth certificates.  Given that there is still substantial prejudice against transgender people, we should not subject this vulnerable population to further discrimination in the workplace, in housing, or other areas of their lives.

“We applaud Senator Lewis for helping to amend our vital records law in a way that aligns with the practices that we’re seeing in other states and on the federal level,” said Krina Patel, MassEquality’s Director of Legislative and Political Affairs.  “Transgender lives are under attack on many fronts, and there’s a tremendous amount of work to be done for complete equality.  However, this measure is another victory for transgender people, and we look forward to working with our allies and the Commonwealth of Massachusetts to ensure that these changes to our vital records law are implemented as smoothly as possible.”

Senator Lewis’ measure, which is consistent with medical best practices, would bring Massachusetts in line with an existing process already adopted by the federal government, five states, and the District of Columbia.  The measure was originally adopted as an amendment to the Massachusetts Senate’s version of the FY16 budget before being included in the final version of the state budget signed by the Governor.