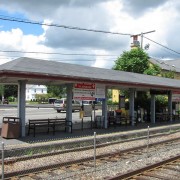 Joined by a number of legislative colleagues, Senator Jason Lewis submitted a letter to the Massachusetts Bay Transportation Authority (MBTA) and Keolis Commuter Services, the private operator contracted to operate the commuter rail lines, expressing serious concerns over announced service cuts, made without meaningful public input, to the commuter rail schedules for the Haverhill and Lowell lines.

“It is hard to justify the disruption to families in our region caused by schedule changes due to service reductions when other stations are adding trips to their itineraries or seeing no service reductions,” said Senator Jason Lewis.  “I am also deeply concerned about the lack of opportunity for meaningful public input.  As we move toward another tough New England winter, I want to ensure that our constituents can rely on the commuter rail for dependable, accessible service, especially during rush hour.”

Last winter, Senator Lewis organized regional legislators in submitting a letter to the MBTA and Keolis calling attention to the inadequate commuter rail service in the wake of historic winter weather.

The full text of the letter to the MBTA and Keolis reads:

We are deeply concerned about proposed changes to the Haverhill and Lowell commuter rail lines, changes that reduce public transportation options for our constituents, and which appear to have been put into place without the opportunity for our residents and districts to be heard.

Recently you proposed amending 4 commuter line schedules for north of Boston.  Of those 4, we are pleased for our colleagues and their constituents that you added 6 trips to the Newburyport/Rockport Line, and an additional trip to the Fitchburg line.  Regrettably, this gain for public transit access appears to have come at greater cost to our communities: the Lowell and Haverhill lines have each lost 7 daily train trips.   Our constituents are naturally concerned – why, of all the commuter lines in the state, are ours targeted for service reductions?

Some of these lost train trips come during the rush hour, when our constituents are trying to get to work, or trying to get home to their families after a long day.  Some examples of concerns our residents have raised:

•    Wakefield is losing a prime rush hour train.  Train #215, leaving North Station at 5:15pm on the Haverhill line, sees only one change to its itinerary, the loss of the 5:35pm stop in Wakefield.  It is confounding as to how the de minimis time saved from the loss of this single stop can be an overall benefit when weighed against the substantial inconvenience imposed upon Wakefield-area commuters who would lose a stop right in the heart of evening rush hour.

•    Winchester Center and West Medford lose a number of trains during morning rush hour.  Among other impacts, this leaves working parents with school drop off or daycare responsibilities unable to both (1) drop their children off at school and (2) take the commuter rail.  These parents live heavily scheduled lives that involve complicated commutes.  After dropoff (which is constrained by school and daycare operating hours), they take the 8:39am train inbound, knowing there is the 8:52am train if they are running late or school drop-off is delayed for any reason.  The newly-introduced schedule features an 8:28am train as the latest pre-9:00am train, with another train not passing through West Medford or Winchester Center until more than an hour later, at 9:43am.  This schedule makes it impossible for working parents of elementary school children to safely drop off their kids at school and still make it to work until after 10am.

•    Winchester residents who work past 5:00pm will have fewer options.  Currently, if one misses Train #337, leaving North Station at 6:25pm on the Lowell line and arriving at Winchester Center at 6:44pm, one would take the 6:55pm train (#221) arriving at 7:12pm.  However, under the revised schedule, missing the 6:25pm train out of North Station would require waiting a whole hour until a 7:25pm train, which wouldn’t arrive at Winchester Center until 7:42pm.

We are concerned about the process through which these decisions were made, without seeking significant public input about the impact of such changes.

Thank you for considering the concerns we have laid out in this letter.  Your hard work in running the commuter rail service is greatly appreciated, and we look forward to resolving these scheduling concerns in partnership with you.  Please do not hesitate to contact us with any questions or if we can be of any assistance.