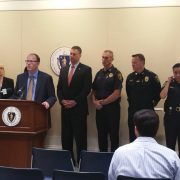 During a May 2nd State House press conference, law enforcement officials from several Massachusetts communities joined with representatives of the National Alliance on Mental Illness of Massachusetts (NAMI Mass) and Middlesex County Sheriff Peter Koutoujian in support of Senator Jason Lewis’ bill to improve police training for incidents involving people who are in a mental health or substance use crisis.

Senator Lewis spoke about the disproportionate number of people with mental health and substance use disorders who are arrested, or worse, when what they really need is treatment.

“Police have become the first responders for people experiencing crises related to mental illness and substance use,” said Senator Lewis.  “Without appropriate training for officers, these encounters can lead to tragedy—people ending up in jail or, in the worst cases, injury or death.  As soon as people who need care enter the criminal justice system, recovery becomes more difficult, as does maintaining their own health, getting and keeping jobs, and maintaining appropriate relationships.  This all contributes to furthering the cycle of behavioral health problems.”

His bill proposes establishing The Center of Excellence in Community Policing and Behavioral Health to:
•    serve as a clearinghouse for best practices in police response to people with mental illness and substance use disorders;
•    develop and implement Crisis Intervention Team (CIT) training for all veteran and new recruit municipal police officers; and,
•    provide technical assistance to cities and towns to develop collaborative partnerships between law enforcement and human service providers that maximize referrals to treatment services.

In Massachusetts, more than 50% of people who have a drug use disorder also have a mental health condition.  At the Middlesex Jail & House of Correction, which houses approximately 1,100 men, 46% of new admittances in 2015 self-identified with a history of mental illness and more than 2,000 required medical detox, according to Sheriff Koutoujian, who is a founding member of Law Enforcement Leaders to Reduce Crime and Incarceration.

“Providing local law enforcement with the appropriate tools to divert non-violent individuals suffering from mental illness or substance abuse away from the criminal justice system and into necessary community-based treatment has the ability to change countless lives,” Sheriff Koutoujian said.

Only 17% of police departments in Massachusetts have access to the resources and training necessary to respond effectively to behavioral health and substance use crisis calls, according to NAMI data.  This puts everyone at risk—the individuals in crisis, police officers, and members of the public.

“These citizens need an evidence-based and community-collaborative focused approach to treatment and to diversion from incarceration,” said Somerville Police Chief David Fallon.

According to June Binney, director of the Criminal Justice Diversion Program at NAMI Mass, nearly a quarter of all state correctional inmates—and as many as half of all county jail inmates—are receiving some mental health services.  “The Center of Excellence is needed so that police officers in all 351 cities and towns in the Commonwealth can get the training and support they need to make sure that people with mental illness and substance use disorders are connected with needed services in their communities, rather than languishing in a jail cell,” she said.

The proposed Center of Excellence is projected to cost the state $1.5 million to $2 million dollars per year, of which some funding is already available in the Department of Mental Health budget.  Sheriff Koutoujian referred to the Center as a vision, and said “now we need to find the resources.”

Arlington Police Chief Fred Ryan commented the Center can help drive down arrests and ensure people who need help can get it in the community. “For far too long we’ve been telling people we can arrest our way out of addiction and we can arrest our way out of mental health disorders. It’s not the case. We need treatment services in the community and we need to partner with our mental health professionals and change the standard of care in the Commonwealth,” Ryan said.