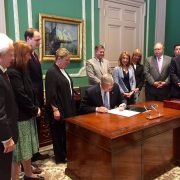 Governor Charles Baker today signed into law legislation reforming how the state handles public records. The legislation, originally filed in the Massachusetts Senate by Senator Jason Lewis, is the first update to the public records law since the early 1970’s.

The legislation will reduce costs for those requesting public records, as well as ensure timely compliance with public records requests, while remaining mindful of resource constraints and other challenges facing local governments. Further, the bill brings Massachusetts in line with 47 other states and the federal government in allowing attorney’s fees to be awarded to plaintiffs who are victorious in court when wrongfully denied records. The bill requires attorney fees to be awarded, except in certain defined situations.

“Media and ordinary citizens deserve access to information that rightly belongs in the public domain,” said Senator Lewis. “Government transparency and accessibility are fundamental to a healthy democracy. This important reform legislation will help bring the Commonwealth into the 21st century and strengthen the public trust in our government institutions.”

“As the cradle of liberty, Massachusetts should lead the way on openness and transparency, not lag behind the rest of the nation,” said Pam Wilmot, Executive Director of Common Cause Massachusetts. “The law Governor Baker just signed will help us catch up and begin to take our rightful place among those states that highly value and promote transparency.”

“We’re so grateful to Senator Lewis for his leadership on public records reform,” said Gavi Wolfe, Legislative Counsel at the ACLU of Massachusetts. “He is a true believer in the importance of open and transparent government to a healthy democracy. As a lead sponsor, he listened closely to a wide variety of stakeholders and worked hard to craft strong and balanced legislation that will make real progress for freedom of information.”

Under the legislation, each state agency and municipality is required to appoint at least one public records access officer to serve as the point of contact for all public records requests and coordinate a timely and thorough response. The public records officer does not have to be a new employee.

The new law requires public records requests to be met in a timely fashion (generally, within 10 days, and no more than 25 days); sets limits on fees that can be charged to the requester; sets a framework by which courts can award reasonable attorneys fees, and allows for imposition of up to $5,000 in punitive damages; requires posting online of many commonly requested public records, and declares certain MBTA pension documents are public records.

The new law is mindful of resource constraints at local municipalities, with provisions allowing cities and towns more time to reply to requests, and greater opportunities to recover costs – particularly for smaller communities.