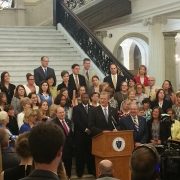 The Massachusetts Legislature passed, and Governor Charles Baker signed into law, a measure to ensure that men and women receive equitable compensation for comparable work. The new law prohibits discrimination on the basis of gender in the payment of wages for comparable work unless the variation is based upon a mitigating factor including: seniority; a system that measures earnings by quantity or quality of production, sales, or revenue; education, training, or experience.

Notably, the law will prevent employers from requesting salary history in hiring, a measure designed to end the self-perpetuating cycle of wage disparity. Massachusetts would be the first state in the nation to adopt such a provision. However, prospective employees may voluntarily disclose their past salaries.

In Massachusetts, women earn on average approximately 82 cents for every dollar earned by men.  Women lose approximately $12 billion every year due to the wage gap.  In 40% of households with children, women are the primary earners.  This pay gap harms our families.

“This new law represents a deeply meaningful step in the effort to prevent workplace discrimination and close the gender pay gap,” said Senator Jason Lewis. “This measure not only enhances fairness in the workplace but also provides families with a stronger economic outlook as the wage gap shrinks.  I’m proud that Massachusetts continues to lead the nation on issues of fairness and equality.”

This law, which received substantial support from the business community, represents a consensus-based effort to ensure that the legislation would be practical, effective, and sustainable. Key to those efforts were defining “comparable work” and maintaining flexibility for performance-based compensation. The law incentivizes companies to correct compensation disparities internally before going to court by creating three-year affirmative defense from liability. Within that time period, employers must complete a self-evaluation of its pay practices and demonstrate reasonable progress in eliminating pay disparities.