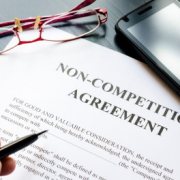 Most people are probably not familiar with non-compete agreements, at least until they are hired for a job by an employer who requires one as a condition of employment. Non-compete agreements restrict where somebody can work, for a certain period of time, after leaving their current employer. Supporters of these agreements argue that they are necessary to protect a business from an employee leaving to work for a competitor or to start her own business that may be competitive with her former employer.

However, I believe that non-compete agreements are inherently unfair to workers and their families, and they also harm our state’s economy by sapping innovation and restricting labor mobility. Originally limited mainly to the high tech industry, their usage in other industries, including the lower-wage service sector, has unfortunately become more widespread in recent years. It is time to get rid of non-compete agreements or at least significantly scale them back in Massachusetts.

About half of our state’s technology sector workforce is bound by non-compete clauses, with one-third of those arrangements restricting employment for more than a year. There are also egregious examples of workers in hair salons and sandwich shops who are restricted from leaving and working for another business in that industry for a substantial period of time. The result is that workers and their families may have to struggle without income during the restricted period, or find it difficult to land a job in another industry. Skills and technical knowledge can also atrophy during this period when an individual is kept out of the workforce. This is simply unfair.

There is also substantial research indicating that non-compete agreements stifle innovation. The U.S. Department of the Treasury recently published a report detailing the negative effects that non-compete agreements have on employment and innovation, as well as the positive effects that employee mobility has on labor productivity by achieving a better matching of workers and firms.

California bans the use of non-compete agreements in almost all situations. Many experts believe this has been one of the contributing factors to the incredible success of Silicon Valley. Of the billion-dollar tech companies founded in the last decade, 32 out of 36 of them are based in California. None are located in Massachusetts. While the Commonwealth certainly does enjoy a thriving innovation economy, we could be doing even better in terms of building new companies and creating more jobs.

At the beginning of this legislative session, I filed a bill to get rid of non-compete agreements in Massachusetts. Both the Senate and the House passed different versions of this legislation. There was agreement between the branches that non-compete agreements should not be allowed for low-wage workers, students, or workers who are laid off. However, there were differences in the length of the restricted period that would be allowed for other types of workers as well as the compensation that would have to be paid to the employee during this restricted period. Unfortunately, these differences proved too great to overcome in the final days of the legislature’s formal session in July, and so a bill never quite made it to Governor Baker’s desk.

The good news is that we have made significant progress in educating lawmakers and the public about the harms caused by non-compete agreements. I plan to re-file my bill next legislative session (which begins in January, 2017) and I’m very hopeful that we will be successful in eliminating or substantially scaling back non-compete agreements in Massachusetts.

I will continue to champion this issue going forward because I believe it’s both an issue of fairness as well as fostering innovation and economic growth in the Commonwealth.