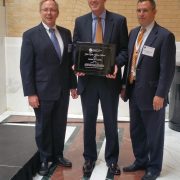 Senator Jason Lewis was recently honored to receive the John Collins Warren Award from the Massachusetts Chapter of the American College of Surgeons (MCACS) for his work on healthcare policy in the Massachusetts Senate and, specifically, for efforts “to protect patient access to safe, high-quality surgical care through outstanding leadership and distinguished service to the Commonwealth of Massachusetts.”

Dr. Warren, for whom the award is named, was one of America’s prominent medical leaders in the first half of the 19th century, whose accomplishments include: playing a key role in establishing New England’s first medical journal, The New England Journal of Medicine and Surgery (first issue January 1812), which subsequently evolved into today’s New England Journal of Medicine; introducing general anesthesia to the world in 1846; and, being a founding member of Massachusetts General Hospital and serving as the facility’s first surgeon.

Senator Jason Lewis, who represents the 5th Middlesex Senate district (including Malden, Melrose, Reading, Stoneham, Wakefield, and precincts 1, 2, 3, and 8 of Winchester), is center in the photo.  Standing to Senator Lewis’ left is Dr. Michael Jaklitsch of Brigham and Women’s Hospital, who serves as MCACS President.  Standing to Senator Lewis’ right is Dr. Peter Masiakos of Massachusetts General Hospital, who serves as MCACS Treasurer.