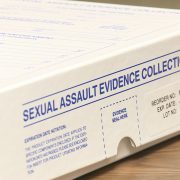 The Massachusetts Senate this week passed H. 4659, An Act relative to preservation of evidence for victims of rape and sexual assault.  This important bill will provide much needed relief to survivors of sexual assault throughout the state by requiring that rape evidence kits be held by public safety officials for the length of the statute of limitations for the crime charged.  Under current law, survivors of sexual assault who have not yet chosen to report the crime must notify law enforcement every six months if they wish to preserve the evidence contained in the kits.

“Sexual assault is a horrific and traumatic crime, and undue burdens shouldn’t be placed on survivors of sexual assault,” said Senator Jason Lewis.  “This legislation is both more humane for victims and more sensible for law enforcement.”

This issue, along with other concerns regarding the timely testing and maintenance of sexual assault evidence kits, was raised in a 2013 report of the Senate Committee on Post Audit and Oversight.  Based on that report, a comprehensive bill was filed which included a provision to extend the time period for holding the evidence kits.

The legislation, which passed the Massachusetts House of Representatives in August, enjoyed bipartisan support and the support of victim’s advocacy groups.

The bill, which now goes to the Governor, also calls for the promulgation of regulations to standardize the retention and preservation of sexual assault evidence, as well as requiring a report by the director of the state’s crime laboratory on the feasibility of establishing a single location or multiple regional locations for the retention and preservation of all forensic evidence collected in the Commonwealth.