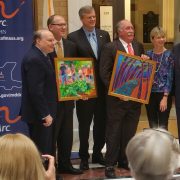 Senator Lewis received the award at a State House ceremony held by The Arc of Massachusetts in coordination with the Massachusetts Developmental Disabilities Council.  The award was presented to Senator Lewis by Senate President Stanley Rosenberg.

In awarding Senator Lewis the Legislator of the Year award, advocates cited his efforts to help pass a new law to prohibit discrimination based on disability in access to organ transplantation, as well as his advocacy for expanding Operation House Call, a program to educate medical professionals on how to address the unique healthcare needs of individuals with intellectual and developmental disabilities.

“Through my work with statewide organizations like The Arc of Massachusetts and local advocates like Triangle, which is based in Malden, I have gained valuable insight on how state government can play a meaningful role to help enhance individuals’ independence and support their effort to maximize their potential and ability to play active roles in their communities,” said Senator Jason Lewis.  “I’m honored to receive this award, and I look forward to continuing our work to improve the lives of individuals with intellectual disabilities and their families.”