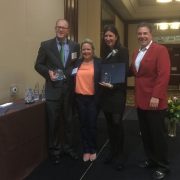 Citing his strong support for the nursing profession and for safeguarding public health, the American Nurses Association-Massachusetts (ANA Mass) presented Senator Jason Lewis the “Friend of Nursing” award at their recent annual Awards Dinner and Conference.  ANA Mass’ mission is to advance the profession of nursing and the quality of patient care across the Commonwealth.

In presenting Senator Lewis with this award, ANA Mass President Cathleen Colleran stressed that Senator Lewis has been “very supportive of the issues that face the nursing practice at the State House” in his role as Senate Chair of the Joint Committee on Public Health, and also mentioned his work to ensure that public health is put ahead of industry profits in the legalization of commercial marijuana.

In his remarks upon receiving the award, Senator Lewis said that he is looking forward to continuing to work with ANA Mass on a number of important issues, including safe patient handling, reducing workplace violence, and modernizing the scope of practice for nurse practitioners. He added that “it is unacceptable that there are more injuries suffered by nurses in hospitals and other healthcare facilities than workers in any other employment setting. We must do more to ensure the safety and well-being of nurses in the Commonwealth.”