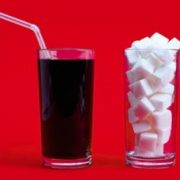 There are plenty of foods and beverages that most of us consume that we know are unhealthy for us. So why should we single out sugary drinks?

The simple answer is that sugar-sweetened beverages are by far the largest source of added sugar in the American diet – more than desserts and candy combined. And, it is clear from many studies that there is a strong link between consuming these beverages and developing serious health conditions, including obesity, type 2 diabetes, heart disease, and poor dental health. Treating these preventable chronic illnesses is a major driver of the high and rising healthcare costs that are squeezing our family, business, and government budgets.

Enjoying a soda or lemonade used to be an occasional treat for most children and adults. But, today, these beverages are consumed in far greater quantities. The American Heart Association recommends that children consume no more than one 8-ounce sugary drink per week; however, 60 percent of Massachusetts children drink at least one sugary drink per day.

Sugary drinks, such as sodas, energy drinks, sports drinks, and sweetened iced teas, offer no nutritional value and are usually consumed in addition to, not in place of, solid calories, thus contributing significantly to weight gain. In Massachusetts, approximately one-third of children and adolescents and 60 percent of adults are overweight or obese. Meanwhile, the rate of Massachusetts residents that suffer from diabetes has more than doubled over the past 20 years, and it is estimated that 35 percent of the adult population is pre-diabetic. According to a 2010 study conducted by the Harvard School of Public Health and Brigham and Women’s Hospital, drinking just one or two sugary beverages daily increases your risk of developing type 2 diabetes by 26 percent.

Healthcare costs to treat obesity-related conditions, diabetes, and heart disease easily exceed $500 billion annually in the United States. We all bear this burden through higher health insurance premiums and taxes that we pay.

To help address this public health crisis and reduce healthcare costs, we have introduced new legislation, An Act to promote healthy alternatives to sugary drinks. The goal is to reduce the consumption of sugary drinks by replacing it with water and other healthier beverage choices, particularly among children and teens. This will improve health and lower rates of preventable chronic diseases, which in turn will contribute to lower healthcare costs.

Early results from jurisdictions that have implemented excise taxes on sugar-sweetened beverages are promising. After Berkeley, California, implemented a 1-cent-per-ounce tax in 2015, consumption of sugary drinks fell by 21 percent and water consumption increased by 63 percent in certain neighborhoods compared to cities without the tax.

Opponents argue that such a tax would cost jobs. However, the evidence indicates that there is likely to be little net impact on jobs, since many people simply shift their purchases to lower-sugar beverages. Another concern raised is that this tax would be regressive, falling more heavily on lower-income people. While this is true of all so-called “sin” taxes, the disease burden caused by high consumption of sugary drinks falls overwhelmingly on poorer communities. Furthermore, most of the tax revenue would be invested in these same communities, leading to even greater health benefits.

Prevention is the key to reducing rates of costly, preventable chronic diseases that are driving up healthcare costs. Reducing the high consumption of sugary drinks is one effective prevention strategy we should be aggressively pursuing.