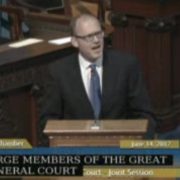 The Massachusetts legislature voted 134-55 to advance the Fair Share constitutional amendment to the ballot for consideration by voters in the 2018 statewide elections.  The amendment would assess an additional 4% surtax on individual annual income over one million dollars, and requires the legislature to allocate the increased revenue solely to education and transportation needs.

The amendment specifically states that the 4% income tax will only apply to individual annual income starting at $1 million.  Any income less than $1 million would be taxed at the current state income tax rate of 5.1%.  According to the Department of Revenue, the proposed amendment would affect approximately 14,000 Massachusetts residents and will raise between $1.4 and $2.2 billion annually, earmarked specifically for new investments in education and transportation.

“The Fair Share Amendment is the best opportunity we have right now to make our tax system fairer, invest in education and transportation, strengthen our economy, and begin to restore the American Dream for working families in the Commonwealth,” said Senator Jason Lewis, whose full remarks at the Constitutional Convention are below.

Massachusetts has fundamental needs in both transportation infrastructure and education.  446 bridges in Massachusetts are “structurally deficient,” meaning they have “major deterioration, cracks, or other flaws that reduce the ability to support vehicles,” and an estimated $14.4 billion of bridge repairs are needed.

Further, the revenue generated by the Fair Share Amendment will support ongoing efforts to update the Chapter 70 school funding formula and implement the recommendations of the Foundation Budget Review Commission to ensure adequate funding for our K-12 school districts, an effort for which Senator Lewis has spent his tenure in the legislature advocating.

In addition, the rising cost of college education has hindered the ability of younger generations to afford a college education without exorbitant amounts of student debt.  Before 1987, a student working a minimum wage job could pay their way through UMass Amherst without any debt. Today, the average UMass Amherst student who takes out student loans to pay for school is graduating with over $30,000 in student debt, and the average graduate of Bridgewater State with loans leaves school with over $32,000 in student debt.

Under the Massachusetts constitution, a proposed constitutional amendment must be approved by one quarter of all elected members of the legislature, which would currently be 50 votes.  The legislature must approve the amendment in two consecutive joint sessions, which happen during each two year legislative session, before the question appears on the ballot for voter approval.  Following last year’s 135-57 vote to advance the amendment, and with today’s successful vote, the amendment will be placed on the 2018 ballot.

Remarks in Support of the Fair Share Amendment, as prepared for delivery
Delivered before the Constitutional Convention of the General Court on June 14, 2017

I rise in support of the Fair Share Amendment. I believe this proposal would make our tax system fairer, enable badly needed investments in our education system and transportation infrastructure, strengthen the Massachusetts economy, and provide our constituents with greater opportunity and an improved quality of life.

Poor and working families in Massachusetts are struggling to get by every day. For them, the American Dream seems ever more elusive, if not downright impossible. People are working longer hours, and often multiple jobs. Since 1979, worker productivity has increased an astonishing 65%. But workers are not getting ahead and they’re not getting their fair share.

This is taking a terrible toll on our families, particularly our children. The child poverty rate in Massachusetts has been rising for years, with one in six children now growing up in poverty. And one in three children are living in a household with an income below 200% of the poverty level. In a state as wealthy as Massachusetts, this is shameful.

Income and wealth inequality in our country is at levels not seen since the roaring 1920s, right before the Great Depression. Massachusetts is the sixth most unequal state. While there are no doubt a number of factors that have contributed to stagnating incomes for working families and such high levels of inequality, our state tax policy is one of these factors. And, unlike the forces of globalization or rapid technological change, state tax policy is within our direct control. We can change it.

Furthermore, our current tax structure is unable to support the needs of our Commonwealth. In 2001, we invested 11% of the state’s economic output in our state budget. Today, that has fallen to 9.5%. Virtually every area of the state budget is underfunded, especially education and transportation that are critical to our state’s future economic growth.

Opponents of the Fair Share Amendment wring their hands and claim that it will drive millionaires out of Massachusetts. Yes, some very wealthy people may move; perhaps they were already thinking about retiring to Florida or Arizona where it doesn’t snow. But the overwhelming evidence from studies of state tax policy strongly suggests that the vast majority of high-income households will not leave the state simply because of a higher marginal tax rate. There are many other good reasons to stay in Massachusetts. In fact, investments in a stronger education system and improved transportation infrastructure will make Massachusetts an even more desirable place to live, raise a family, and grow a business.

The Fair Share Amendment is the best opportunity we have right now to make our tax system fairer, invest in education and transportation, strengthen our economy, and begin to restore the American Dream for working families in the Commonwealth. Thank you.