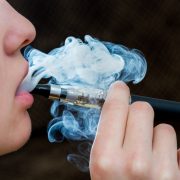 Most adults are not familiar with e-cigarettes or vaping. Unfortunately, the same cannot be said for teenagers. The use of e-cigarettes in recent years has exploded among middle and high school students, who think that they are cool and harmless. This has rapidly become a major public health concern.

An e-cigarette is a handheld electronic device that creates an aerosol by heating a liquid, which the user inhales. The use of e-cigarettes is referred to as vaping. The liquid typically contains nicotine, propylene glycol, glycerine, and various flavorings. Since they contain nicotine, e-cigarettes are tobacco products.

Since e-cigarettes are still largely unregulated (although the FDA is now moving forward with some health and safety regulations), it is impossible to know all of the ingredients in any particular brand of e-juice (the liquid that goes into the device). However, researchers have found that e-cigarette vapor may be filled with cancer-causing chemicals. One study, noted in the New England Journal of Medicine, found that e-cigarette vapor can contain cancer-causing formaldehyde at levels up to 15 times higher than regular cigarettes. The American Society of Clinical Oncology notes that “according to one analysis by the FDA, the tobacco solution used in e-cigarettes contains a toxic chemical found in antifreeze and several cancer-causing chemicals, such as nitrosamines.”

There has not yet been sufficient time to study the long-term health effects and risks of vaping. Some tobacco control advocates and public health experts believe that e-cigarettes are safer than smoking and, therefore, can be a harm reduction strategy for adult smokers who have been unable to quit. Others disagree and believe it is a mistake to treat e-cigarettes differently than other tobacco products.

There is universal agreement, however, that young people should not be vaping. Nicotine — whether in cigarettes, cigars, chewing tobacco, or e-cigarettes — is a highly addictive drug. Teenagers are much more susceptible to nicotine addiction than adults, and nicotine has harmful health impacts on the developing brain. In fact, ninety-five percent of tobacco users become addicted to nicotine before age 21.

Tobacco companies are aggressively marketing e-cigarettes to young people, using the same playbook that led to high rates of smoking in the past. These tactics include celebrity endorsements, ads on social media, cheap products, and enticing flavors like cotton candy, fruit punch, and crème brulee. The industry also downplays any health risks. For example, check out www.juulvapor.com whose products are very popular among middle and high school students in our communities (according to my teen daughter).

As a result, the use of e-cigarettes among teenagers has exploded. According to the CDC, the percentage of high school students who reported using an e-cigarette at least once during the month the survey was taken was 4.5% in 2013.  As of 2016, this number increased to an astonishing 23.7%. Anecdotally, I have heard from some high schools in our area that the vaping rate may now exceed 40%. School officials are scrambling to figure out how to respond.

In my role as Senate Chair of the legislature’s Public Health Committee, I have filed legislation, An Act to Protect Youth from the Health Risks of Tobacco and Nicotine Addiction, and I’m doing everything possible to see that this bill becomes law in Massachusetts. The bill makes it clear that e-cigarettes are tobacco products; raises the minimum legal sales age for all tobacco products from 18 to 21; and prohibits vaping in schools and other places where smoking is not permitted. A number of our communities have already enacted similar policies through the action of local Boards of Health, but we need to implement these important safeguards statewide.

I also believe we need to step up education and prevention efforts, aimed at both students and parents, in our schools and communities. We must act with urgency if we are going to stem the epidemic of vaping among young people and prevent another generation from becoming addicted to nicotine and tobacco products.