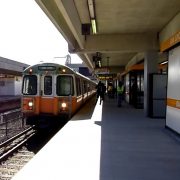 The Massachusetts State Senate released its MassMoves report highlighting residents’ priorities for a forward-thinking 21st century vision for the Commonwealth’s transportation system. The Senate launched the MassMoves initiative as a part of the Commonwealth Conversations Tour in order to collect feedback directly from residents to help envision a better transportation system across Massachusetts.

The MassMoves executive summary and full report, entitled MassMoves: A Vision for the Commonwealth’s 21st-Century Transportation System, can be accessed online at https://MALegislature.gov/CC/. This work was supported by the Barr Foundation.

“A reliable, accessible, and affordable public transportation system is vital for robust economic growth and a sustainable quality-of-life across our region,” said Senator Jason Lewis. “Those who rely on public transit span demographics and geography, from a commuting workforce, to students and senior citizens, to families traveling to recreation spots across the region and state. Feedback directly from residents locally and statewide was integral to guiding the Senate’s planning on transportation to ensure that the Commonwealth meets its residents’ public transit needs in the years ahead.”

The Commonwealth Conversations Tour, not to be confused with Senator Jason Lewis’ local Community Conversations series, is a statewide listening tour spanning nine regions across the state, giving the Senate the opportunity to meet with local residents, businesses, and interest groups in every corner of Massachusetts to hear their concerns directly on issues of importance to every resident.

Column: We Need To Do More to Stop Wage Theft
Scroll to top