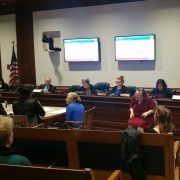 The Joint Committee on Public Health, on which Senator Jason Lewis serves as Senate co-Chair, and the Massachusetts Caucus of Women Legislators co-hosted an informational hearing at the State House on the topic of domestic violence as a public health issue. The purpose of the hearing was to examine the prevalence of domestic violence in the Commonwealth, its impact on the health of Massachusetts residents, current efforts addressing the issue, and recommendations for future actions.

“Domestic violence is a serious public health problem that harms the health and livelihood of too many residents across the Commonwealth,” said Representative Kate Hogan, House Chair of the Joint Committee on Public Health. “I hope that, using the information provided by testifiers at the hearing, we in the Legislature can determine how to enhance support for those working in prevention and response services and identify new policy initiatives to end domestic violence in Massachusetts.”

The U.S. Centers for Disease Control and Prevention (CDC) reported in July 2017 that 55 percent of female homicides in the U.S. from 2003 to 2014 were related to intimate partner violence and in Massachusetts, using 2010-2012 data, the CDC estimated that over one in four women and one in ten men have experienced victimization by an intimate partner during their lifetime. Jane Doe Inc., Massachusetts’ statewide coalition against sexual and domestic violence, reported that between 2003 and 2012, 177 people in the Commonwealth were killed by their intimate partner, with 87 percent being female; additionally, 25 children of those affected by domestic violence also lost their lives during this period.

“The hearing emphasized the importance of addressing domestic violence through a public health lens,” said Senator Jason Lewis. “We heard more evidence of how critical it is to do everything possible to prevent this type of violence from occurring in our communities.”

“The Baker-Polito Administration has been committed to introducing tools and reforms for policymakers, providers, law enforcement, community organizations, survivor advocates and others to raise awareness, prevent violence and hold offenders accountable,” said Lieutenant Governor Polito. “As Chair of the Governor’s Council to Address Sexual Assault and Domestic Violence, we appreciate the Joint Committee on Public Health and Massachusetts Caucus of Women Legislators’ partnership on this issue and for hosting this informative discussion as the Commonwealth prioritizes all residents living a life free of fear and violence.”

“A comprehensive public health approach to sexual and domestic violence must include both prevention and response, must be trauma informed and culturally responsive and inclusive” said Maureen Gallagher, Policy Director, Jane Doe Inc. “The work of JDI and our members has been driven by a public health perspective for many years and as the field has evolved, so have our perspectives. We often say ‘domestic violence can affect anyone’ and yet it does not affect everyone equally. If you are an immigrant, a person of color, a member of the LGBQ/T community, a poor person, or a person with a disability, experiences of gender-based violence will impact you differently and create more barriers to safety.”

“We must continue to work together to elevate the voices of survivors of domestic violence and put an end to the suffering too many women, men and children are still facing in its wake,” said Senator Linda Dorcena Forry. “By empowering survivors to tell their stories, working with advocates and allies, we can help those who are still facing domestic violence. We must do better to empower members of marginalized groups, like our immigrant community, who may feel they will be punished for coming forward. They must know we are here to support them as they show the courage to come forward.”

On October 2nd, the Massachusetts House of Representatives and Senate adopted a joint resolution, which was introduced by Chairs Hogan and Lewis and co-signed by 133 other representatives and senators, recognizing October as “Domestic Violence Awareness Month” in the Commonwealth and affirming domestic violence as a threat to public health.

In addition to the oral testimony delivered during the informational hearing, the Joint Committee on Public Health is accepting all written testimony on this subject; testimony can be sent to Madison.Louis@mahouse.gov.