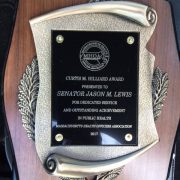 Senator Jason Lewis gave the plenary address at the recent 50th annual conference of the Massachusetts Health Officers Association (MHOA), which represents over 600 local public health officials and associates across Massachusetts and serves as the leader, partner, and voice for local health departments in the Commonwealth. At the conference, the MHOA presented Senator Lewis with the Curtis M. Hilliard Award for Dedicated Service and Outstanding Achievement in Public Health, which is given annually to an individual who demonstrates concern for the advancement of public health programs to the benefit of the citizens of the Commonwealth and has assisted in the delivery of health programs. I’m delighted to be able to join you this morning and deeply honored to be kicking off the 50th Annual Conference of the Massachusetts Health Officers Association, the largest annual public health conference in New England!

When most people think of Paul Revere, what comes to mind no doubt is his historic ride from Boston to Concord on the eve of the American Revolution. We remember the famous words from the poem by Henry Wadsworth Longfellow: “One, if by land, and two, if by sea.” But, I bet you — as public health officials — know something else about Paul Revere. Back in 1799, Paul Revere was named the first health officer of the City of Boston’s brand new Board of Health. This was the first public health department in the nation. Under Paul Revere’s leadership, officials ran an innovative public information campaign, including neighborhood meetings and signs on lampposts, to reduce deaths due to cholera, a very dangerous but highly preventable disease.

In the years since, public health has made innumerable contributions to improving the health and wellbeing of Americans. According to the CDC, public health is credited with adding 25 years to the life expectancy of Americans in the 20th century. The CDC has a top ten list of greatest public health achievements in the last century: immunizations; motor vehicle safety; workplace safety; control of infectious diseases; declines in deaths from heart disease and stroke; safer foods; healthier mothers and babies; family planning; fluoridation of drinking water; and reducing tobacco use. Here in the Commonwealth of Massachusetts we have continued to lead the way on many of these great public health achievements.

Today, however, I know many of you are probably frustrated that public health, and particularly local public health, does not get the attention or the resources that it rightly deserves. According to the Blue Cross Foundation: 20% of our health is determined by our genetics, and of course there is not much we can do about that; another 20% of our health is determined by the access we have to quality healthcare services; and, the remaining 60% is determined by social, environmental, and behavioral factors. In other words, the social determinants of health are absolutely critical to health outcomes.

So Ben Franklin was right when he observed that “An ounce of prevention is worth a pound of cure.” But, the reality today is that only a very small fraction of the total resources that we invest in health are actually spent on public health and prevention.

The good news is that I believe this is slowly starting to change. There is a growing recognition among policy makers, healthcare providers, and other stakeholders that a greater focus on population health is critical to reducing rates of preventable chronic diseases, which, in turn, would dramatically improve health outcomes and reduce high healthcare costs.

Take, for example, the epidemic of Type 2 diabetes. Since 1990, the percentage of Massachusetts residents living with diabetes has risen from 3.8% to almost 9%. According to the American Diabetes Association, the medical costs of treating a person with diabetes is 2-3 times greater than for somebody who does not suffer from the disease. It’s estimated we spend more than $3 billion annually in Massachusetts in direct medical costs to treat diabetes, and we also suffer an indirect cost of more than $1 billion in lost productivity. So, the need to take action is urgent, and we are starting to respond with innovative prevention programs in our communities — like the Diabetes Prevention Program that many YMCAs across the Commonwealth are now offering and that, increasingly, health insurers are actually willing to pay for.

As you may be aware, last week the state Senate debated and passed the most significant healthcare legislation on Beacon Hill in five years. The overarching goals of this sweeping legislation are to maintain our highest-in-the-nation access to health insurance coverage, improve quality of care for patients and health outcomes, and lower healthcare costs. In order to help accomplish these goals, the bill takes a number of important steps to further our efforts around prevention and wellness: it strengthens and accelerates efforts already underway to move our healthcare payment system away from fee-for-service and toward a system that rewards better health outcomes; it reauthorizes the groundbreaking Prevention and Wellness Trust Fund, and provides new sources of funding for the public health investments made by the PWTF that seek to prevent costly and preventable chronic health conditions; it expands access to basic preventative health services, including physical health, behavioral health, and oral health; and, this legislation supports greater access to supportive housing services and other efforts to address the social determinants of health.

I would like to now provide you with a brief update on some other important public health issues on Beacon Hill.

As most of you are hopefully already aware, the Special Commission on Local and Regional Public Health is busy at work. This Commission was created as a result of legislation that I filed last legislative session and was signed into law by Governor Baker in 2016. The purpose of the Special Commission is to “assess the effectiveness and efficiency of municipal and regional public health systems and to make recommendations regarding how to strengthen the delivery of public health services and preventive measures in the Commonwealth.” This presents an excellent opportunity to understand the many responsibilities of our local boards of health and the challenges that you face in fulfilling these responsibilities. It is my hope that the findings and recommendations of the Special Commission, which are expected next year, will lead to further action from our state government. I will stop there since I expect that Commissioner Bharel will speak in more depth about the work of the Commission.

Next, let me address the opioid epidemic. Our communities are continuing to be ravaged by addiction and tragic overdose deaths, although it appears that efforts by state and local government, healthcare providers, law enforcement, and other stakeholders is finally starting to turn the tide. Some of the steps that the state legislature and the Baker administration have taken in recent years include: requiring expanded insurance coverage for addiction treatment; increasing funding for treatment and other services; strengthening the prescription monitoring program; improving prescriber training to reduce the number and quantity of opioid prescriptions and encourage the use of other pain management strategies; efforts to reduce stigma; and more. I believe we must also significantly step up our efforts around education and prevention, particularly for our young people.

Even though much of our focus, understandably, is on fighting the opioid epidemic, tobacco and nicotine products still remain the #1 preventable cause of illness and premature death in Massachusetts. Smoking rates among adults and teenagers are at their lowest levels in decades, thanks to sustained public health efforts over many years. However, Big Tobacco continues to innovate with new products and marketing on social media. I’m very concerned about the explosive growth in e-cigarettes, or vaping, among teenagers. According to the CDC, the percentage of high school students who reported using an e-cigarette at least once during the month the survey was taken was 4.5% in 2013. As of 2016, this number had increased to an astonishing 23.7%. Anecdotally, I have heard from some high schools in my district that the vaping rate may now exceed 40%. Many teens and their parents don’t understand the health harms of e-cigarettes and the risk of nicotine addiction. Thanks to the great work of our local boards of health, many cities and towns have taken strong steps to fight Big Tobacco, including raising the minimum legal sales age to 21 and regulating e-cigarettes. Along with Representative Paul McMurtry in the House, I have filed legislation in the Senate known as An Act to protect youth from the health risks of tobacco and nicotine addiction. This bill would raise the legal sales age for all tobacco products to 21 statewide; prohibit the use of e-cigarettes in schools, workplaces, and wherever else smoking is not allowed; and ban the sale of tobacco products in all healthcare facilities including pharmacies. The bill passed the Senate last session by a vote of 32-2, and I’m hopeful that we will be successful in getting it signed into law this session.

Lastly, let me touch on what I know is a hot topic: marijuana. As you know, legalization of adult-use marijuana passed at the ballot last November. Then, earlier this year, the legislature passed a bill to fix many problems in the ballot question, and to strengthen public health and safety protections. The Cannabis Control Commission has been formed and is developing regulations that will govern the new marijuana industry in Massachusetts. At the same time, many cities and towns are deciding whether to opt out of allowing marijuana businesses within their borders. As public health experts and advocates in your respective communities, you have a very important role to play as we move forward. Right now, I would urge you to make sure that your voices are being heard by the Cannabis Control Commission so that local public health issues get the attention they deserve as regulations are being written. Just like with tobacco, local boards of health will play a critical role in pursuing policies that protect the public health, including: decisions about time, place, and manner of sale for marijuana products in those communities that don’t opt out; ensuring home growing is done safely; dealing with complaints about odor and other issues; and stepping up youth education and prevention efforts. I’m sure you are concerned about where you will get the resources to do this important work. The law that we passed in July directs some of the funding from marijuana taxes and licensing fees to support local public health and prevention efforts. Also, communities that don’t opt out will be able to charge a local excise tax of up to 3% on marijuana sales, and this revenue could be used for investments in local public health and safety. I imagine you have many questions, some of which I may be able to answer shortly during the Q&A period. But others will need to be answered over time as we move forward and figure things out together.

In closing, I want to encourage each of you to reach out to your own state legislators. Make sure they know who you are and the vitally important work that you do in local public health. Share with them your input and feedback. Make the case for increased investment in local public health. Here’s one example from my own experience of why this matters. Back in 2012 when I was serving as a State Representative, Winchester health director Jennifer Murphy approached me about an issue that I previously knew nothing about. She explained to me that it had become very difficult for municipal public works employees and seasonal workers to treat catch basins where mosquitoes breed since the Department of Agriculture had changed pesticide regulations in 2010. This was seriously hampering efforts to prevent the spread of West Nile virus. Together with David Henley of the East Middlesex Mosquito Control Project, we wrote and filed legislation to solve this problem. And, a few years later, the bill passed and was signed into law by Governor Deval Patrick!

Thank you. And now, I’m eager to take your questions.