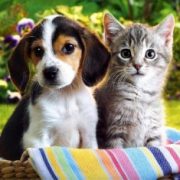 The Massachusetts Senate passed two bills strengthening pet health and safety in the Commonwealth. S.1155, An Act relative to protecting puppies and kittens, ensures that puppies and kittens are bred and sold in safe and healthy environments, and strengthens the Massachusetts “Puppy Lemon Law” to give pet owners more options if they unknowingly purchase a sick pet. S. 2332, An Act to Protect Animal Welfare And Safety In Cities And Towns (PAWS II), expands on gains first secured in the original PAWS law that was filed in response to the Puppy Doe animal abuse case of 2014, now the subject of a trial in Dedham District Court.

“As an animal welfare advocate and pet owner, I am very pleased to support these bills,” said Senator Jason Lewis. “They will build on progress already made to ensure the humane treatment, health, and safety of animals in Massachusetts, further punish those who engage in neglect and cruelty, and help make sure that when a pet is adopted into a family that the transition is a healthy and successful one.”

S. 1155 applies safety and breeding standards to protect pets and pet owners. It prohibits the sale of puppies and kittens younger than eight weeks old, increasing the likelihood that they will grow to be healthy dogs and cats, and outlines a process for a veterinarian to declare an animal suffering from a significant adverse health condition “unfit for sale.” To protect pet owners who unknowingly purchase a sick pet, the bill outlines remedies available to buyers of animals declared unfit for sale, including exchange of the animal or a refund and reimbursement for reasonable veterinary fees. The bill also sets forth a procedure for a seller to contest these demands.

Further, S. 1155 regulates commercial breeders and pet shops to further protect the health and safety of animals. It prohibits pet shops from selling dogs or cats originating at or purchased from breeders that are not properly licensed or have committed certain violations of the Animal Welfare Act. Pet shops would also be required to maintain certain compliance records and conspicuously post identifying information for the animal and the breeder. Finally, the bill empowers the Department of Agriculture to create rules and regulations to ensure commercial breeders maintain humane conditions.

PAWS II encompasses several key components recommended by the Animal Cruelty and Protection Task Force, which was constituted under the original PAWS Act. Task force members included the Massachusetts District Attorneys’ Association, State Police, the Attorney General’s office, the Animal Rescue League of Boston, veterinarians, the Massachusetts Society for the Prevention of Cruelty to Animals, and other stakeholders.

Key components of PAWS II include provisions to: require animal abuse be reported by the Department of Children and Families, the Department of Elder Affairs, and the Disabled Persons Protection Commission; add animal control officers as mandatory reporters of child abuse, elder abuse, and abuse against disabled persons; ensure efficient enforcement of animal control laws and increase penalties in animal control laws that provide non-criminal penalties for abuse; prohibit the drowning of wild and domestic animals; prohibit engaging in sexual contact with an animal; remove automatic killing of animals involved in animal fighting, creating other options for these animal victims; add animal crimes to the list of offenses that serve as the basis for a request for a determination of detention and or release upon conditions; prohibit insurance companies and housing authorities from refusing insurance coverage or housing with breed restrictions; and, require abandoned animal checks in vacant properties by property owners and landlords within three days following a foreclosure or termination of tenancy.

Both bills now go to the House of Representatives for consideration.