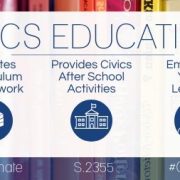 The Massachusetts Senate voted to pass S. 2355, An Act to Promote and Enhance Civic Engagement, legislation developed over eighteen months of bipartisan collaboration and passed with the support of Senator Jason Lewis.

Senator Lewis noted that he had been urged to support this bill by young people across the partisan spectrum. “Members of both Young Democrats and Young Republicans chapters in our region encouraged me to support this bill because our youth are increasingly civically engaged and are eager to contribute as citizens,” said Senator Lewis. “We have seen young people across the country take leadership roles in issue debates and other opportunities for community engagement. This legislation will further prepare our students to be civic leaders and fully participate in our democracy.”

The legislation: updates the requirement that all public schools provide instruction in American history and civics; requires all public school students to participate in 2 student led civics projects; permits the Massachusetts Department of Elementary and Secondary Education (DESE) to establish regional civics councils; permits DESE to establish an annual convention to assess the state of civics education; permits school committees to design a student outreach officer position who shall be responsible for ensuring that a student advisory committee exists and is informed about the agenda of the school committee; requires the Massachusetts Board of Elementary and Secondary Education (BESE) to create a civics endorsement for educators demonstrating competency; establishes a special commission to study the development of civic education for youth; and, requires the Massachusetts Secretary of State to establish the High School Voter Challenge, where each public high school will appoint a student voter outreach officer who will hold voter registration drives for eligible voters to register and pre-register to vote during High School Voter Challenge Weeks.

The curriculum is made possible by the Civics Project Trust Fund, which will provide funding for professional development and for the further development of curriculum frameworks to ensure that this measure is not an unfunded mandate to be financed out of municipal budgets.

The bill has been referred to the House of Representatives for consideration.