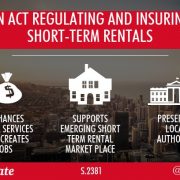 The Massachusetts Senate passed S. 2381, An Act regulating and insuring short-term rentals, with the support of Senator Jason Lewis. The bill expands the scope of the state’s room occupancy excise tax and local option excise tax to include short-term transient accommodations, including those arranged through platforms such as AirBnB.

The legislation would generate an estimated $34.5 million and $25.5 million in state and local revenues, respectively, based on the most recent Senate Ways and Means Fiscal Impact Report. The expanded tax base will automatically apply to all 175-plus cities and towns that have already adopted the local room occupancy excise to date.

“This important legislation includes measures to level the playing field, preserve local control and flexibility for cities and towns, and support the emerging short-term rental industry,” said Senator Jason Lewis. “As innovation continues to power the Massachusetts economy, our legal framework has to keep up to ensure fairness. This bill accomplishes that in a responsible and balanced way.”

The bill contains consumer protection measures, including a requirement that hosting platforms maintain liability insurance, and strengthens data collection and sharing for cities and towns. It also creates a commission to examine ways that hospitality lodging units can be used as a resource to increase availability of emergency shelter for displaced persons.

The bill will now be reconciled with a version passed by the House of Representatives.