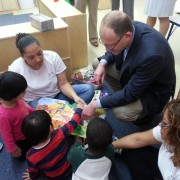 Nelson Mandela said, “Education is the most powerful weapon which you can use to change the world.” In our society we typically think that children’s formal education should begin at the age of five when they enter kindergarten. But, decades of research have now convincingly demonstrated the importance and value of early childhood education for much younger children. We need to think differently about how to ensure that all children – regardless of their family’s income – can access high-quality, developmentally appropriate early childhood programs in their community.

Early childhood education produces short- and long-term positive effects on children’s cognitive and social development. In fact, it is estimated that expanding early learning initiatives overall would provide benefits to our society of up to $9 for every $1 spent.

According to a 2017 report from the Organization for Economic Cooperation and Development, the United States falls significantly behind other developed countries when it comes to enrollment rates of 3- and 4-year-olds in pre-school programs.

Even here in Massachusetts, where we pride ourselves on our commitment to education, we are not doing enough to prepare our youngest children for academic and professional success in life. Approximately 43% of third graders in the Commonwealth cannot read at grade level. The third grade marker is viewed as a key indicator of future performance in school and beyond. Universal access to quality early education is critical to addressing this persistent achievement gap in our schools. The Massachusetts Department of Early Education and Care has found that low-income children who participate in high quality early education programs are 40% less likely to be held back or require special education services, 30% more likely to graduate from high school, and twice as likely to go to college. That is an astounding difference.

Unfortunately, many families in Massachusetts today cannot afford to send their children to pre-school, and financial assistance to aid these families is insufficient. The state legislature has been increasing funding in the past few years to help more low-income families enroll their children in quality childcare and early education programs. The legislature has also focused on increasing pay for early childhood educators, who are typically paid much less than K-12 teachers. But we must do more.

To address these urgent shortcomings, I am proud to be a co-sponsor of S. 221, An Act Relative to Universal Pre-Kindergarten Access. This important legislation recognizes that children age three and four should be part of our core public education system by adding them to their local school districts’ Chapter 70 enrollment (Chapter 70 is the K-12 school funding formula in Massachusetts). Implementation would initially focus on the highest-need communities and broaden to statewide coverage over five years.

To provide the necessary funding, I support passage of the Fair Share Amendment, also known as the millionaire’s tax. This proposal would assess an additional 4% state income tax on annual household income greater than $1 million. The threshold would be adjusted annually for inflation to ensure that only those residents who can afford to pay a bit more in taxes would be required to do so. The proceeds from the Fair Share Amendment could only be used to fund education and transportation. Thus, expanding access to affordable early education could be one of the uses for these new funds.

Ensuring that all families and all children in Massachusetts have access to high quality early education would be a wise investment that would help close our persistent achievement gap, maximize the potential of our youth, and ultimately strengthen Massachusetts’ economy.