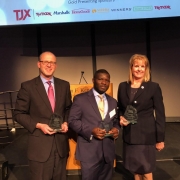 Senator Jason Lewis was honored to receive a 2018 Public Servant of the Year Award from Triangle, Inc., at Triangle’s annual award ceremony and gala, which occurred Wednesday, May 2, at the JFK Presidential Library and Museum. Established in 1971, Triangle empowers people with disabilities and their families to enjoy rich, fulfilling lives, offering employment, residential, and other support services.

Senator Lewis has been proud to advocate in the Legislature for programs and services aligned with Triangle’s mission, including successfully advocating for stronger budgetary support for Triangle’s School to Career program, which assists students and recent graduates aged 16-26 with career planning and internship and employment opportunities.

“Senator Jason Lewis has been a strong advocate for the disability community his entire career,” said Coleman Nee, CEO of Triangle, Inc., which is headquartered in Malden. “As Senate Chair of the Joint Committee on Labor and Workforce Development, Senator Lewis has worked diligently to ensure that more career opportunities are available for persons with disabilities and that our governmental and commercial workforces are diverse and inclusive for all our citizens. It was an honor to present him with this award and we deeply appreciate his support and leadership.”

“Expanding opportunities for all members of our community is a central focus of my work in the legislature,” said Senator Jason Lewis. “It has been a privilege to work closely with the tremendous advocates at Triangle to enhance the independence and realize the potential of people with disabilities. I’m honored to receive the Public Servant of the Year Award.”

Senator Lewis received the Public Servant of the Year Award alongside co-awardees and colleagues Senator Joan Lovely of Salem, Representative Steve Ultrino of Malden, and Representative Dan Ryan of Charlestown.