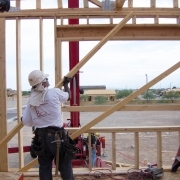 “In spite of strong labor laws and many successful and law-abiding businesses in our state, wage theft remains a major problem in Massachusetts, especially for the most vulnerable workers, like immigrants and low-income families” said Senator Jason Lewis, Chair of the Senate Committee on Labor and Workforce Development. “This legislation will help prevent and deter wage theft, ensure a level playing field for all employers, and protect the rights of working families.”

Wage theft has become a pervasive problem throughout the Massachusetts economy, with an estimated $700 million stolen from 350,000 employees each year in the Commonwealth. This illegal practice can take many different forms, such as violating minimum wage laws, not paying overtime, forcing workers to work off the clock, misclassifying employees, or simply not paying workers at all.

To crack down on wage theft and increase accountability in labor contracting and subcontracting, the bill holds lead contractors liable for wages, as well as any penalties or fines, associated with wage theft violations. The bill also enhances the enforcement power of the Attorney General’s office by allowing it to bring wage theft cases to court and seek civil damages.

The bill also establishes a wage theft compensation fund, administered by the Attorney General, to expend funds to workers and lead contractors under certain circumstances, as well as to provide worker outreach and education to prevent wage theft.

The bill now moves to the House of Representatives.