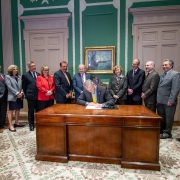 BOSTON— Senator Jason Lewis and Representative Paul Brodeur, who serve as Co-Chairs of the Committee on Labor and Workforce Development, led a successful effort to create a new paid family and medical leave program in Massachusetts. The legislation was signed into law on June 28 by Governor Charlie Baker.

“Creating a paid family and medical leave program in Massachusetts is a major victory for working families,” said Senator Jason Lewis. “I greatly appreciate the hard work and collaboration of the Raise Up Massachusetts coalition and leaders of the business community to craft a program that will help hundreds of thousands of workers, level the playing field for small businesses, improve public health, and strengthen our state economy – at a cost that is affordable for workers and employers.”

“Working families in Massachusetts will no longer have to choose between losing their jobs or caring for a sick loved one,” Representative Paul Brodeur said. “While workers and their rights remain under attack in Washington DC, I’m proud that here in the Commonwealth we have been able to work with business and labor leaders to craft a paid leave program which will uplift and empower generations of residents.”

The legislation provides up to 12 weeks of paid family leave to care for a new child or a seriously ill or injured family member, and up to 20 weeks of paid medical leave for a worker to recover from his/her own serious injury or illness. Workers must meet certain eligibility and certification requirements to ensure program integrity. While on leave, a worker will receive partial wage replacement up to a maximum weekly cap of $850 (which will be adjusted upwards over time). The bill prohibits employer retaliation against workers who take leave, and ensures that a worker is restored to his/her previous position, or to an equivalent position, with the same status, pay, and employment benefits.

“Thank you to Senator Lewis and Representative Brodeur for your leadership and fair-minded facilitation of our paid leave design team,” said Debra Fastino, Executive Director of the Coalition for Social Justice and the Co-Chair of the Raise Up Massachusetts coalition. “Massachusetts workers will benefit from the strongest, most progressive paid family and medical leave program in the nation.”

The signing of this legislation into law is the culmination of an almost year-long process led by Senator Lewis and Representative Brodeur. In their role as Co-Chairs of the Labor and Workforce Development Committee, they brought together stakeholders from Raise Up Massachusetts and leaders of the business community to work closely together to design a paid family and medical leave program that would meet the needs of workers while addressing the concerns of employers.

As a result of this successful effort, Raise Up Massachusetts announced that they would no longer pursue a ballot question to establish paid family and medical leave, removing substantial uncertainty and risk for all stakeholders.