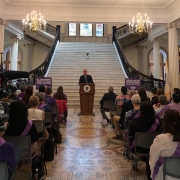 “The Massachusetts Alzheimer’s and Dementia Act is critical for the hundreds of thousands of people in our state affected by these diseases,” said Senator Jason Lewis, Senate Chair of the Committee on Public Health. “We all know a friend, neighbor or loved one who has been touched by Alzheimer’s or dementia, and it is clearer than ever that the growing healthcare crisis requires bold and compassionate response and mitigation.”

In 2017, Senator Lewis convened a special legislative hearing on the Alzheimer’s and dementia healthcare crisis. Advocates from around Massachusetts testified about the real challenges produced by dementia. This hearing was a catalyst for legislative action in the House and the Senate, as elected officials learned more about devastating toll of Alzheimer’s: not just on those with the disease, but also on their families and caregivers. Nearly 60 percent of caregivers rate the emotional stress as high or very high, and about 40 percent suffer from depression.

“Alzheimer’s is the single largest unaddressed public health threat in the 21st century and we remain on the front lines of this crisis every day here in the Commonwealth,” shared Daniel Zotos, Director of Public Policy & Advocacy of the Alzheimer’s Association, Massachusetts/New Hampshire Chapter. “This legislation follows in the tradition of Massachusetts being a national leader in health care and we commend the Legislature for ensuring everyone impacted by Alzheimer’s gets the quality care and support they deserve.”

The legislation helps patients and their families receive better, more comprehensive care. Caregiving for people with Alzheimer’s is an energy- and time-intensive endeavor and when medical emergencies occur for unrelated conditions, people with Alzheimer’s and related dementias often fare poorly in the acute care setting. This bill helps ensure that caseworkers, medical providers and hospital administrators and staff better understand Alzheimer’s disease so that they can provide the best treatment possible for patients and clients who are brought to them.