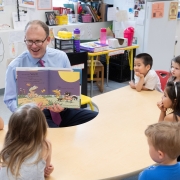 John Adams said, “Laws for liberal education of youth… are so extremely wise and useful, that, to a humane and generous mind, no expense for this purpose would be thought extravagant.” In drafting the Massachusetts state constitution (the oldest written constitution still in use anywhere in the world), Adams recognized that education is indispensable to the success and prosperity of a society, which is why he enshrined a right to education in this foundational document.

The landmark Education Reform Act of 1993 put in place a funding formula, known as Chapter 70, that was designed to ensure that every school district in Massachusetts would be fairly and adequately funded and every student would have access to a quality education. First, a “foundation budget” is calculated for each school district to determine the resources needed to educate the students in that district. Then, the “local contribution,” the amount that each municipality must contribute from its own revenues, is calculated based upon local income levels and property values. Finally, the state government allocates Chapter 70 aid annually to fill the gap between the foundation budget and the required local contribution. Additionally, if it so chooses, each community can put more of its local resources toward education if it wants to spend an amount greater than the foundation budget.

This formula worked well through the 1990s, with progress made in reducing inequities in school funding and closing student achievement gaps. However, we have been backsliding since 2000 because the foundation budget has become outdated and no longer accurately reflects the true costs to educate our young people in the 21st Century. This is due to a variety of factors, including rapidly rising healthcare costs, greater special education needs, underestimating the challenges faced by students from high poverty neighborhoods and non-native English language speakers, and more.

When I was a State Representative, I filed legislation that created the Foundation Budget Review Commission (FBRC). This bipartisan commission spent a year studying school finance issues and received input from education stakeholders across Massachusetts. The FBRC’s 2015 report confirmed the gaps in the foundation budget and estimated that we are shortchanging our public schools by $1-2 billion annually, with the greatest harm being done to our poorest communities.

In the years since, the state Senate has twice passed legislation to implement the recommendations of the FBRC. Unfortunately, at the end of the previous legislative session in 2018, the House and Senate were unable to reach final agreement on the details of the necessary changes to the foundation budget and Chapter 70 formula. With the start of the new legislative session last month, I’m pleased that the House, Senate and Governor Baker have all indicated that fixing the formula is a top priority this year.

Senator Sonia Chang-Diaz has re-filed legislation known as the Education PROMISE Act, and I’m proud to co-sponsor and help champion the passage of this bill. It would fully implement all the recommendations of the FBRC, which would lead to major improvements in the adequacy and equity of school funding in the Commonwealth. In addition to passing the Education PROMISE Act, we will also need to raise additional funding to enable the state to fully meet its obligations. This is why I’m committed to leading the effort to pass the Fair Share Amendment or millionaire’s tax in Massachusetts (more on this initiative in a future column).

Our students, schools, and communities can’t wait any longer for us to fix the school funding formula. We must get it done this year.