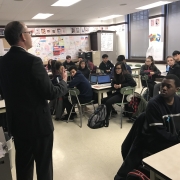 BOSTON, MA – Senate President Karen Spilka announced last week that Senator Jason Lewis has been appointed Senate Chair of the Joint Committee on Education in the Massachusetts Legislature. Senator Lewis was also appointed to a leadership position on the Senate Ways and Means Committee, which is responsible for crafting the annual state budget and reviewing most fiscal and policy matters.

“I’m excited to Chair the Education Committee, since the challenge of ensuring adequate and equitable funding for public schools was the issue that first motivated me to run for the state legislature,” said Senator Lewis. “While we should celebrate the Commonwealth’s national leadership in student performance and educational excellence, we must also redouble our efforts to address unacceptable achievement and opportunity gaps that plague our low-income students, students of color, and English language learners. It is both a moral and economic imperative that we address these fundamental inequities.”

Several years ago, Senator Lewis filed legislation that created the Foundation Budget Review Commission (FBRC). This bipartisan commission spent a year studying school finance issues and received input from education stakeholders across Massachusetts. The FBRC’s 2015 report confirmed the gaps in the foundation budget and estimated that we are shortchanging our public schools by $1-2 billion annually, with the greatest harm being done to our poorest communities.

In the years since, the state Senate has twice passed legislation to implement the recommendations of the FBRC. Unfortunately, at the end of the previous legislative session in 2018, the House and Senate were unable to reach final agreement on the details of the necessary changes to the foundation budget and Chapter 70 formula. Leaders from Beacon Hill and beyond have all indicated that fixing the formula is a top priority this year, and as Senate Chair of the Education Committee, Senator Lewis will play a key role in deliberation and negotiations on any education funding legislation.

Senator Lewis was also appointed Vice Chair of the Committee on Labor and Workforce Development, where he served last legislative session as committee chairman, accomplishing major policy achievements like the passage of a $15 per hour minimum wage and the adoption of paid family and medical leave statewide. He plans to continue his work to foster economic justice and greater opportunity for working families across the Commonwealth.

Senator Lewis was appointed to serve on the Community Development and Small Businesses Committee, where he intends to use his role to continue to advocate for downtown revitalization in the communities of the Fifth Middlesex District and supporting small businesses throughout Massachusetts. Additionally, he will serve as a member of the Marijuana Policy Committee, as the Legislature continues to guide the safe implementation of legal adult-use cannabis in the state.