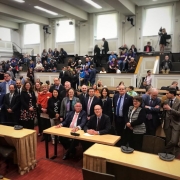 Massachusetts is a great place to live, work and raise a family. We are rightly proud of our state’s reputation as a national and international educational, scientific and economic leader. However, our Commonwealth also faces tremendous unmet needs that are hurting our families and communities and putting our economic future at risk.

According to the 2015 bipartisan Foundation Budget Review Commission, our public schools are underfunded by $1-2 billion, which is harming our ability to provide every student with the educational opportunities that they deserve. Inadequate state funding for our public colleges and universities has led to large increases in tuition and fees, and the average student debt load has more than doubled since 2004. For our youngest learners, shortfalls in state funding for early education mean that we have 51,000 young children living in poverty who are unable to access pre-school.

We have a crumbling transportation system that needs an investment of more than $8 billion just to bring roads, highways and the MBTA into a state of good repair. And we would need to invest another $9.5 billion to complete all necessary bridge repairs.

The challenges we are facing are immense, and in the context of our current budget capacity, they can sometimes feel insurmountable.

So how can we fund these critical unmet needs? Working families are tapped out with the high costs of housing, healthcare, transportation, childcare and other expenses. They are barely getting by, often working multiple jobs and living paycheck to paycheck. Although they would greatly benefit from investments in education and transportation, they cannot afford to pay higher taxes to fund these investments.

This is why I have filed legislation to revive the Fair Share Amendment, which would impose a 4% surtax on households earning more than $1 million a year, and dedicate the estimated $2 billion in new revenue to support education and transportation in the Commonwealth. These wealthy households can afford to pay slightly higher taxes to support the critical investments that we need.

Furthermore, under our current upside-down tax system, the wealthiest households in Massachusetts actually pay a lower share of their income in state and local taxes than do the poorest households. This is the exact opposite of a fair and progressive tax system.

This proposal is exactly the same as the citizens’ initiative that previously garnered strong support from the public and legislators. In 2015, the Raise Up Massachusetts coalition launched a campaign for the Fair Share Amendment by collecting more than 157,000 signatures from Massachusetts voters. In May 2016 and again in June 2017, the state legislature voted overwhelmingly to advance the Fair Share Amendment to the ballot. The only difference is that this proposal is a legislative amendment to the state constitution. As such, it is not subject to the same legal challenge that derailed the citizens’ initiative last year.

Critics of the Fair Share Amendment claim that it will drive wealthy people and businesses out of Massachusetts. But extensive economic research shows that tax policy only has a small impact on where people choose to live. Other factors, such as quality of life, access to educational opportunity and a well-educated workforce, and high-quality healthcare are much more important.

I was not elected to simply accept the status quo. I believe we must adopt the Fair Share Amendment to make our tax system more progressive and raise the revenue we need to invest in our Commonwealth.