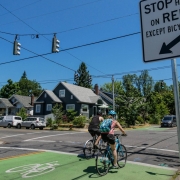 “We need to do everything possible to reduce traffic accidents and fatalities on our roads,” said Senator Jason Lewis. “This legislation will help us take an important step in that direction by making our roads safer for pedestrians, cyclists and motorists.”

The bill would further require trucks and similar large vehicles purchased, leased or under contract with the Commonwealth after a certain date to be equipped with lateral protective devices, convex mirrors and crossover mirrors to reduce the risk posed to vulnerable road users who are susceptible to being unseen by truck driver’s and slipping underneath large vehicles during accidents.

The bill would additionally establish a 25 mile per hour speed limit on an unposted area of state highway or parkway inside a thickly settled or business district within a city or town that has accepted the 25 mile per hour local option, as lower vehicle speeds reduce the possibility and severity of crashes.

Finally, the bill increases the flexibility of the Department of Transportation to reduce the speed limit in active construction zones thereby significantly increasing the protection provided to vulnerable workers and first responders at the construction site.

An Act to Reduce Traffic Fatalities now moves to the House of Representatives for consideration. The State Senate is also expected to take up legislation in the near future to prohibit the use of handheld devices while driving, except in hands-free mode.