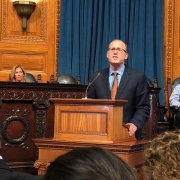 During a constitutional convention on June 12, the Massachusetts Legislature voted to amend the Massachusetts Constitution to place an additional 4 percent tax on annual taxable income in excess of $1 million to generate revenues for transportation and educational investments.

The revenue generated – estimated by the Department of Revenue as much as $2.2 billion annually – would fund repair and maintenance projects for roads, bridges or public transportation as well as funding for public education.

“The revenues from the Fair Share Amendment will go a long way to increase funding for public schools, make higher education more affordable for students and families, and fix our state’s crumbling roads, bridges and public transportation. Today, more than three quarters of legislators voted to advance the Fair Share Amendment, reflecting the overwhelming public support for this measure,” said Senator Jason Lewis, the lead sponsor of the legislation in the State Senate. “The Fair Share Amendment is the best way to make the investments in our Commonwealth that we desperately need in the fairest way possible.”

The income level would be adjusted annually to reflect any increases in the cost of living by the same method used for federal income tax brackets. This would ensure that, over time, the additional 4 percent tax would continue to apply only to the highest earning individuals in the Commonwealth. The tax would apply to all tax years beginning on or after January 1, 2023.

The legislature must approve a constitutional amendment in two consecutive joint sessions, which happen during each two-year legislative session, before the question appears on the ballot for voter approval. If approved, the amendment would go before voters in 2022.