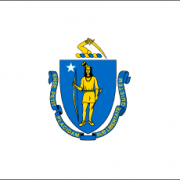 As published in the Boston Globe’s “The Argument” feature on September 6, 2019.

Have you ever seen the Massachusetts state flag flapping in the breeze? Many people will no doubt recognize the white field, blue crest, and gold figure, but surprisingly few stop to consider the meaning of this image — our state seal — which we display as the official emblem of our Commonwealth.

The current state seal was adopted in 1898. The Native American figure is a composite of features primarily based on a portrait of a Chippewa Native American chief not from Massachusetts but Montana and the Dakotas. Above his head is an arm holding a colonial-era broadsword believed to be the sword of Myles Standish, a Plymouth Colony military commander known in part for killing Native Americans. The Native American holds a downward pointed arrow that could be interpreted as signifying the pacification of the native population.

This imagery on our state seal has long been viewed by Native Americans and others as racist, symbolizing white supremacy and ethnic cleansing perpetrated against the indigenous peoples of this region. Based on research by my office, Massachusetts and Mississippi are the only two states with flags that contain what can be interpreted as explicitly racist imagery (the Mississippi flag contains the Confederate battle flag).

I believe it is high time we replaced the flag. As a first step, I’ve joined with state Senator Jo Comerford and state representatives Nika Elugardo and Lindsay Sabadosa in filing legislation to establish a special commission to examine the state seal and motto of the Commonwealth to ensure they reflect and embody our commitment to peace, justice, liberty, and equality for all.

Composed of people with relevant historical and cultural expertise — including Native Americans — the commission would be asked to recommend a revised or new design for the state seal for consideration by the Legislature. State law requires the flag to display the seal, so any new seal would also mean a new flag. The process would be inclusive and thoughtful, hopefully fostering a healthy dialogue, particularly in our schools, about our state’s history.

Our collective symbols of identity matter, and if they marginalize some of our fellow residents and perpetuate harmful stereotypes, they should be replaced.