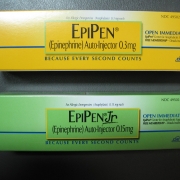 As published by CommonWealth Magazine on September 8, 2019.

Everyone should be able to count on having access to health care that is high quality and affordable. But even in Massachusetts, where we have the highest rate of health insurance of any state in the country, access to affordable care is out of reach for many people. One of the biggest drivers of increasing health care costs for families, businesses, and taxpayers is rising prescription drug prices, which drive up health insurance premiums and increase out-of-pocket costs. It is time that we take strong action to rein in prescription drug costs.

The often–exorbitant prices of many commonly-prescribed medications are driving vulnerable patients to ration their prescriptions and to go to extreme lengths to afford their medications. For example, a Malden resident recently shared her challenge, saying, “For years now, I have struggled with the extremely high cost of prescription drugs. In the last year, I paid $1,888 out of pocket for my prescriptions. More than 10% of my income is going to prescription costs alone. I have been forced to get by on sample pills from my doctor. I had to ask a friend to send me an arthritis gel from Germany where it is sold over-the-counter for a much cheaper price. My children have even bought pills for me from a friend in Canada.”

She is not alone. The Health Policy Commission’s 2018 Cost Trends report showed that residents in Massachusetts increased spending on prescriptions by more than 4% last year, more than twice the 1.6% total increase in health care spending across the system. In addition, drug spending in MassHealth, our state’s Medicaid program, nearly doubled over the past five years. Massachusetts has made major strides in containing other health care cost drivers, but drug prices continue to grow unchecked.

On Beacon Hill, the state legislature recently tackled the first part of this affordability crisis. The Fiscal Year 2020 state budget empowers the Secretary of Health and Human Services, who oversees MassHealth, to directly negotiate additional rebates with pharmaceutical companies and hold a public hearing on the proposed value of high-cost drugs. It also charges the Health Policy Commission with reviewing drug prices to determine if they are unreasonable or excessive. These much-needed reforms, which will increase the state’s bargaining power when purchasing drugs and drive down MassHealth costs, are an important first step.

The pharmaceutical industry says that any effort to rein in high drug prices threatens the development of new treatments. But this obscures the fact that the industry has been raising prices for longstanding medications for treating common and widespread health conditions. For example, from 2011 to 2016, the average price for Doxycycline (used to treat bacterial infections) increased by 338%; the price for EpiPen (used to treat severe allergic reactions) increased by 214%; and the price for Clomipramine (used to treat obsessive-compulsive disorder) increased by 771%. Another very troubling example has been the dramatic increase in the price of insulin, which is putting the health and wellbeing of many people with diabetes at risk.

The state legislature and Governor Baker must take the next step to rein in prescription drug costs by passing this legislation. This is critical to ensuring that patients have affordable access to their medications and to controlling overall health care costs.