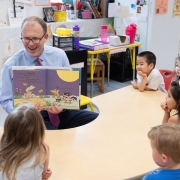 BOSTON – On Thursday, Senator Jason Lewis joined colleagues in the Massachusetts State Senate to pass An Act to protect persons with intellectual or developmental disability from abuse, also known as “Nicky’s Law,” and An Act Relative to Children’s Health and Wellness.

“Protecting the most vulnerable members of our society is a longstanding priority for me, and I was proud to join my fellow senators in unanimous support for these two important bills,” said Senator Jason Lewis. “Nicky’s Law will create essential new protections for people with disabilities in order to ensure their safety and dignity, and the children’s health and wellness bill institutes a wide variety of new measures to support the physical and mental wellbeing of our youth, close health disparities, and make our Commonwealth safer and healthier.”

Under Nicky’s Law, the Disabled Persons Protections Commission (DPPC) would establish a registry that identifies individuals who have abused people with disabilities. The registry, which mirrors an existing registry for childcare employees, would include former employees who have been terminated or separated from employment as a result of abuse. The legislation requires providers to review the registry and prohibits the hiring of anyone who is on the registry.  More than 20 states have enacted and established similar registries.

The Senate also unanimously passed An Act Relative to Children’s Health and Wellness. This comprehensive bill addresses issues related to health care access for children who have aged out of the foster care system by automatically enrolling them in MassHealth. The bill also addresses issues effecting the Department of Children and Families (DCF) by establishing a new data working group to help streamline the agency’s reporting process. It calls for an examination of the barriers to mental and behavioral health supports for children and establishes a commission to study mandated reporting laws and calls for increased education around child sex abuse and exploitation.

The legislation also includes language directing insurance provider directories, which include a list of participating health professionals and their services, to have the most up-to-date and consumer-friendly information available to avoid so-called ‘ghost networks’. The bill calls for the formation of a task force to study and recommend further improvements to provider directories — particularly information about behavioral health providers.

The legislation also creates a commission to study the effectiveness of school-based health centers in closing health disparities among Massachusetts students. Senator Lewis has long championed the idea that preventative healthcare and other resources should be integrated into Massachusetts schools to afford all children access to affordable and adequate health care resources.

Both pieces of legislation now move to the House for further consideration.