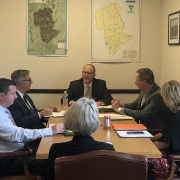 BOSTON – Earlier this week, Senator Jason Lewis, Senate Chair of the Joint Committee on Education, was appointed by Senate President Karen Spilka to serve as the lead Senate negotiator on the conference committee named to finalize the Student Opportunity Act.

The Student Opportunity Act is a landmark education funding reform bill which would invest $1.5 billion in Massachusetts public schools, ensuring adequate and equitable funding for all districts. The bill has passed both the House and Senate unanimously, but there are some modest differences between the two versions. The job of the conference committee is to reconcile these differences, and Senator Lewis expressed his hope that negotiations will be speedy and productive.

The Student Opportunity Act was developed through many months of collaboration among legislators and a variety of stakeholders, and Senator Lewis also emphasized that the voices of all stakeholders, including students, educators, parents and other community members, will continue to be vital to realizing the long-sought goal of school funding reform in the Commonwealth.

When the conference committee concludes negotiations, the product of their work will require final votes of approval from both the House of Representatives and the State Senate before being sent to the Governor to be signed into law.