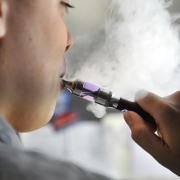 BOSTON – On November 20, the Massachusetts Senate passed landmark legislation to reduce youth access to tobacco and nicotine products. In the wake of widespread increases in youth vaping, this bill offers a comprehensive approach to protecting young people from nicotine use and addiction. The bill, An Act Modernizing Tobacco Control, bans the sale of all flavored tobacco products, including menthol; institutes a 75 percent excise tax on e-cigarettes and e-liquids; and expands health coverage for tobacco use cessation products and counseling. Governor Charlie Baker signed the bill into law on November 27, 2019, and the law will take effect on June 1, 2020.

“Across the communities in our Commonwealth and especially in our high schools, youth vaping has reached epidemic levels, and it’s vital for the protection of our youth and of our public health that we ban the sale of flavored cigarettes and vaping products,” said Senator Jason Lewis, Senate Chair of the Education Committee and past Chair of the Public Health Committee. “The predatory tobacco industry uses ‘fun’ flavors like mango and cotton candy, cheap prices and hip social media marketing to target our youth and hook them with a lifelong addiction to their harmful products.”

While the Commonwealth has made significant progress in preventing youth smoking rates in the last two decades, youth use of e-cigarettes and vaping products has increased dramatically. The 2017 Massachusetts Youth Health Survey reported over 20 percent of high school students were currently vaping–a rate six times that of adult use. More recent reports put estimates on youth e-cigarette use closer to 27 percent.

An Act Modernizing Tobacco Control specifically targets the sale of flavored tobacco products because they have historically been used to attract young people. Flavored cigarettes were banned by the federal government in 2009 as part of the Family Smoking Prevention and Tobacco Control Act. However, that law did not apply to other tobacco products, including e-cigarettes, which come in over 8,000 flavors with youth appeal such as ‘gummy bear,’ cotton candy, fruit punch, mint and menthol.

“We applaud the Massachusetts Senate for taking an important step in protecting future generations of Massachusetts residents from a lifetime of tobacco addiction,” said Allyson Perron Drag, Government Relations Director for the American Heart Association in Massachusetts. “The easy availability of menthol cigarettes, flavored cigars, flavored hookah and kid-friendly, e-cigarette flavors is causing an increase in youth tobacco use of epic proportion. The removal of all flavors from all tobacco products is essential for reducing their appeal to our children. We thank Senate President Spilka, Senator Keenan, Senator Chandler, Senator Cyr, Senator Lewis, and Senator Comerford for their leadership in protecting all kids in the Commonwealth.”

“While Massachusetts has long been at the forefront in this area, thanks to the Senate’s action today, we are poised to lead the nation by passing legislation that would prohibit the sale of all flavored tobacco products, keeping these deadly products out of the hands of our kids,” said Marc Hymovitz, Director Government Relations Director for the American Cancer Society Cancer Action Network in Massachusetts. “ACS CAN commends Senate President Karen Spilka, Senator John Keenan, Senator Harriette Chandler, Senator Julian Cyr, Senator Jason Lewis and their colleagues for taking this historic vote that will truly save lives.”

The new law also institutes a 75 percent excise tax on both e-cigarettes and e-liquids. Taxing tobacco products is a proven method of decreasing youth use and this bill will bring the sales price of e-cigarettes to near parity with cigarette prices.

The law will expand health insurance coverage for tobacco cessation so that people have access to the products and counseling necessary to quit nicotine. The bill requires coverage of at least one cessation product without prior authorization for MassHealth, Group Insurance Commission, and private insurance members.

Further provisions regarding e-cigarettes and vape products were included in the bill to regulate this growing market, including: expanding oversight of the Department of Revenue to include e-cigarette retailers; limiting the sale of e-cigarette products with nicotine content higher than 20 milligrams per milliliter to adult-only stores; and establishing penalties for the illegal distribution of e-cigarettes.

Tobacco use and nicotine addiction remain the leading causes of preventable illness and premature death in Massachusetts. Each year, more than 9,300 people die from tobacco use across the state and smoking-related illnesses are responsible for more than $4 billion in annual healthcare costs to the Commonwealth.