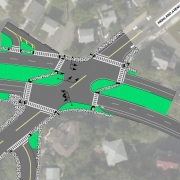 On Friday, August 7, the Massachusetts Department of Conservation and Recreation (DCR) activated the traffic signal at the newly completed intersection at Fellsway East and Highland Avenue in the City of Malden. Malden’s legislative delegation and local leaders heralded the completion of the major safety improvements at the intersection.

This intersection improvement project will have several benefits for the community, including:

“For years, neighborhood advocates, city leaders and state officials have been united in their calls to fix the treacherous Fellsway-Highland intersection, and after careful planning, diligent follow-up and hard work from all stakeholders, this long-overdue safety and traffic improvement is complete,” said Senator Jason Lewis. “I’m grateful to Mayor Christenson, the Malden City Council and Department of Public Works, the Massachusetts Department of Conservation and Recreation, and my colleagues in Malden’s legislative delegation for their collaboration and partnership as we all worked together over the last five years to fix Fellsway-Highland and make it safe for motorists, cyclists, pedestrians and all users.”

“It is great to finally see the completion of this important project that is the culmination of a lot of hard work and input from community and civic leaders,” said Representative Paul Donato. “As someone who lives in the area and travels it frequently, I look forward to a safer experience for all who drive, bicycle, or walk through this busy intersection.”

The intersection of Fellsway East and Highland Avenue, along a heavily traveled corridor used by commuters and local traffic, was notorious for its operational and safety issues and high number of crashes.   In the past, this intersection was ranked number 77 on the 2006-2008 Statewide Top 200 Intersections Crash List.

In 2015, the Malden legislative delegation brought together the DCR and the City of Malden to fund a $30,000 traffic study for this intersection. Because the Fellsway is a state road administered by DCR and Highland Avenue is a city road, state and city officials cooperated closely on the planning and implementation of the improvements to the notorious Ward 3 intersection.

“Street safety for all modalities has always been a priority in my career on the Melrose City Council and now as State Representative,” said Representative Kate Lipper-Garabedian.  “This state-local partnership results in critical improvements at a highly trafficked intersection, and I am grateful for all the work and effort that made this project successful.”

“We heard loud and clear from community members that this intersection needed a change,” said Representative Steve Ultrino of the Fellsway-Highland improvements. “I’m proud of the way our delegation came together to hear those concerns and take action to make this intersection safe for drivers, bikers and pedestrians.”

After the conclusion of the study and public comments from Malden residents, DCR began the safety improvements at the intersection in 2019. Improvements included traffic signals, crosswalks with ADA compliant wheelchair ramps; bike lanes; and reconfigured intersection geometry to improve safety for pedestrians and motorists. As part of the state budget for Fiscal Year 2019, Malden legislators secured $100,000 in state funding for the project by passing a budget amendment filed by Senator Lewis. Later, legislators won an additional $200,000 for this project as part of a Fiscal Year 2020 supplemental state budget bill.

“I could not be more pleased with the outcome of this long-awaited improvement to an intersection that has been a safety risk for our residents,” said Mayor Gary Christenson. “City Councillors-At-Large Craig Spadafora and Debbie DeMaria along with the neighborhood, our partners in the State delegation and DCR made solving this challenge possible, and I’m appreciative of the proactive approach they took in making this happen.”

“On behalf of the entire West End neighborhood, we are so grateful for the safety enhancements now completed at Fellsway East and Highland Avenue. This intersection has been a top concern of neighbors for many years, and it’s a tremendous relief knowing that people who are walking, biking, driving, or who have accessibility needs now have an equal ability to navigate this area safely,” said Amanda Linehan, Ward 3 City Councillor in Malden. “I am tremendously thankful for the excellent communication among DCR and the City of Malden during construction, and especially to Senator Lewis for helping to secure funding for this project in these challenging economic times.”