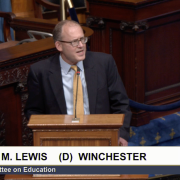 Members of the Massachusetts House and Senate on Wednesday held a Constitutional Convention where they overwhelmingly supported the Fair Share Amendment with a vote of 159-41, sending it to the November 2022 statewide ballot for voters to have the final say.

The Fair Share Amendment would assess an additional income tax of four percentage points on annual taxable household income above $1 million. The revenue generated — estimated by the Department of Revenue to be as much as $2.2 billion annually — would fund repair and maintenance projects for roads, bridges and public transportation; preK-12 public schools; and public colleges and universities in Massachusetts.

“The Fair Share Amendment once again received strong support from legislators and, in public polling, typically receives support from more than 70% of voters in Massachusetts,” said Senator Jason Lewis, the lead Senate sponsor of the proposal. “The reason it is so popular is that most people recognize that our wealthiest residents can afford to pay a bit more in taxes to fund investments in public education and transportation infrastructure that will grow our economy, expand opportunity, and make our Commonwealth more just and equitable for all.”

Should voters approve the ballot measure, the $1 million income level would be increased annually to reflect increases in the cost of living. This would ensure that, over time, the additional four percent tax would continue to apply only to the highest earning taxpayers in the Commonwealth. The tax would take effect on January 1, 2023.

The legislature must approve a constitutional amendment in two consecutive joint sessions before the question appears on the ballot for voter approval. The Fair Share Amendment was approved for a first time on June 12, 2019, in a 147-48 vote. This week’s June 9, 2021 vote of 159-41 ensures the proposal will now appear on the November 2022 statewide ballot.