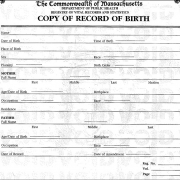 Senator Jason Lewis recently joined a bipartisan majority in the Massachusetts Senate to pass An Act relative to gender identity on Massachusetts identification, legislation which would allow a non-binary option other than male or female on birth certificates and drivers license.

“Vital records are the primary documents that serve as guideposts to our lives: they announce a child’s birth, affirm our most sacred relationships, and help get our affairs in order after we die,” said Senator Jason Lewis, who has been a longstanding advocate for ensuring that state records affirm the subject’s gender identity. “Thanks to the powerful and persuasive advocacy of transgender Massachusetts residents and their allies, the Senate has once again acted to ensure that important state documents can reflect and affirm the gender identity of every resident.”

An Act relative to gender identity on Massachusetts identification would provide for a non-binary option other than male or female on birth certificates and drivers licenses. The bill also directs the state to begin the process of allowing a non-binary option for all state forms and instances where a gender choice is required.

Under the bill, the gender on birth records could be changed by an adult, an emancipated minor, or the parent or guardian of a minor. The gender designations on a birth record could include “female”, “male” or “X”—which indicates that the person is another gender or an undesignated gender. No documentation beyond a self-attestation is required to make a change.

An Act relative to gender identity on Massachusetts identification now awaits action in the House of Representatives.