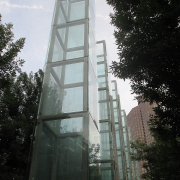 The Massachusetts State Senate on Thursday passed An Act concerning genocide education to provide education to middle and high school students on the history of genocide and to promote the teaching of human rights issues. As Senate Chair of the Joint Committee on Education, Senator Jason Lewis was a key supporter of the legislation.

The bill requires every middle school and high school in the Commonwealth to include instruction on the history of genocide. Similar legislation was advanced by the Senate in prior sessions, but this most recent iteration comes as incidences of hate and antisemitism are on the rise across the country, with several incidents reported in Massachusetts over the past year.

“It is shocking how many young people today have never heard of the Auschwitz concentration camp, the Holocaust, or other heinous genocides perpetrated in the past,” said Senator Jason Lewis, Senate Chair of the Joint Committee on Education. “This important legislation will ensure that more students understand the history of genocide so that it never happens again. I’m grateful to all of the educators and advocates who have worked so hard to get this bill passed.”

In 2020, a widely reported survey commissioned by the Conference on Jewish Material Claims Against Germany, which gauged Holocaust knowledge among millennials and Generation Z populations, found that 63 per cent did not know six million Jews were murdered in the Holocaust. The survey also found that nearly half were unfamiliar with Nazi concentration camps like Auschwitz. Massachusetts does not currently require Holocaust education or other genocides as part of classroom curriculum.

This bill would establish a Genocide Education Trust Fund to support the instruction of middle and high school students on the history of genocide and ensure the development of curricular materials, as well as to provide professional development training to assist educators in the teaching of genocide. Schools and districts can apply for programming support through a competitive grant program.

“We are grateful to Senate President Spilka, Chair Rodrigues, Chair Lewis, and their fellow Senators for moving forward a bill that includes strong provisions to ensure that schools across the Commonwealth have access to Holocaust and genocide education programs,” said Jeremy Burton, Executive Director for the Jewish Community Relations Council. “Numerous incidents over the last year have shown us that this coursework is as critical and relevant now as it has ever been. We are eager to see this bill make it to the Governor’s desk as swiftly as possible.”

An Act concerning genocide education now moves to the Massachusetts House of Representatives for consideration.